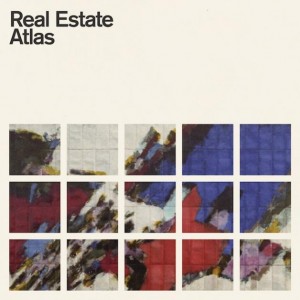 Three years after their impeccable sophomore release Days, indie rock outfit Real Estate return with the highly anticipated Atlas. Atlas sees the band leave behind the more cheerful sound of their previous release in favor of something a little darker. Fast approaching his 30s and with his first child on the way, lead singer Martin Courtney finds the dreamlike, carefree Days of his youth coming to an end. Try as he might to look towards the future with the same optimism, he feels helpless and uncertain of what’s to come.

The production on Atlas is much crisper than on the reverb-heavy Days, further reinforcing the feeling that it’s time to stop dreaming and face life’s challenges. The resulting clarity in the chords and vocals make the tracks on Atlas some of Real Estate’s most stunning compositions to date. The album’s lyrics, however, possess a darker quality. In “Past Lives”, Courtney sings “I cannot come back to this neighborhood / without feeling my own age”, noting how strange and uncomfortable it feels to return to the suburbs in which he spent his youth. “The Bend” touches on Courtney’s feeling of helplessness. He remarks that he feels like he’s  “behind the wheel / But it won’t steer”, before the song closes with a short instrumental that may be the most beautiful piece of the band’s career. Later in “Crime”, he expresses his discomfort with the speed at which his life is progressing. “Toss and turn all night / Don’t know how to make it right / Crippling anxiety”, Courtney laments over gentle and glimmering guitars. “Primitive” has a distinct quality to its sound, drawing influence from Americana while adding Real Estate’s signature flavor. Contributions from Matt Kallman, new band member and former keyboardist for Girls, add an extra dimension to the song that solidifies its place as one of Real Estate’s finest. Atlas closes with “Navigator”, in which Courtney wonders where all the time went. “I stare at the hands on the clock / I’m still waiting for them to stop”, he sings, before conceding, “I’ll meet you where the pavement ends”.

Atlas finds Real Estate awakening from a long dream, finally being forced back into the uncertainty of real life. Martin Courtney is at his most vulnerable, unsure of himself and his future. Yet, he expresses his fears with a calmness that suggests he knows that somehow, in the end, everything will be okay. You might say we could all learn a thing or two from Atlas. In addition, Real Estate are at the top of their game with Atlas. The band has never sounded fuller or more sincere, and Courtney has constructed an incredible coming-of-age album. Sure, your late teens are rife with new-found freedom, but your late twenties are the bittersweet point at which you truly leave your youth behind and step into the arms of adulthood.