Album Review: As It Is: Okay 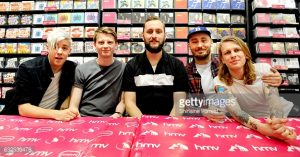 As It Is is an up and coming pop punk band from the United Kingdom. Their second album, Okay, was released on January 20. This album has a good mixture of upbeat songs and continues their theme of having deep and meaningful lyrics. The first half of the album includes songs with cheerful tones and catchy lyrics, such as the song “Pretty Little Distance.”  Yet, the second half of the album gets slower, softer and has heartfelt lyrics. For example, the song “No Way Out” conveys a sense not being able to escape one’s mind yet still has a slow yet a strong and powerful meaning.

Overall, “Okay” has this strong lyrical and emotional vibe, and that largely comes from their American singer, front man and songwriter Patty Walters. Walters used this album as an outlet to talk about his past dealings with depression and anxiety, and that reflect most in the song “Hey Rachel”. In a post discussion after the release of the music video for the song, Walters revealed that his past relationship with his sister Rachel, who was suffering from mental illness, was the fuel for the lyrics he wrote for the song itself. Overall, this album is another step up from As It Is and its message, saying it’s OK sometimes to be not OK, is a heartfelt message that is relatable to anyone.