Capitals Update: 2016 Prospects on Intro to the NHL 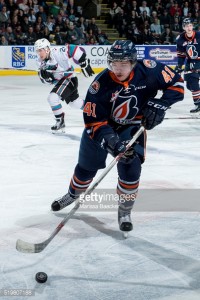 By this point all of us nutso D.C. hockey fans who actually give a rat’s ass about the intricate inner workings of the NHL will know about the up-and-comers that this past summer’s Development Camp produced. The 2016 Draft brought several new names to the Kettler rink here in Arlington, including Lucas Johansen, Beck Malenstyn, and Dmitriy Zaitsev among others. One of the prominent names in the pool of younger prospects is that of Garrett Pilon. Coming from the 3rd round, 87th overall spot of the 2016 Draft, Pilon’s general dialogue pertinent to hockey is highly intellectual and speaks to a deeply technical understanding of the game.

Watching the 2016 Development Camp it was evident that Pilon quickly found his comfort zone in the new environment, and it showed in the way he ran drills- clean and quick in a “less is more” way that highlighted his efficiency and skill. Upon personal observation, I found that these characteristic traits closely paralleled those of Travis Boyd, 6th round 2011 draft, who plays for the Caps affiliated Hershey Bears and is a favorite among Caps fans. Coincidentally, Pilon cited him when asked about which of the experienced prospects he was looking to during his first Camp. “I didn’t really know too many of the [other prospects] going into it, but I was up against Boyd in draws, he’s a pretty good player and he was kind of like a veteran leader at practices.”

We asked the rookie about coming into his own with an entirely new group of players, and transitioning from his WHL team, he said, “definitely was a change of pace, coming from a group of guys you’re with all year and have that chemistry with on the ice. When I went to Washington it was new for me but every player out there was pretty smart.” Pilon’s performance at his first NHL-context training was pretty exemplary, and this year’s Development Camp definitely gave the 5’11 Center a platform to show off as a utility player who capitalizes on speed and agility over brute force. It also taught him further methods by which to translate game theory into practice, he explained, “you pick up on a lot of little things. I got more detailed in my game, and coming back [to the Blazers] I put a lot more thought into my practices and drills”

Between playing for the Kamloops Blazers of the WHL then moving into the Washington Capitals Development Camp, Pilon said, “the drills are similar at times, but practice runs a little more smoothly with the NHL I’d say, because probably the biggest thing is that execution is better at Dev Camp, but I think my team is pretty good about how they format and run our practices.” It’s an important attribute that as a player he’s comfortable with the level of intensity of the Capitals’ practice formatting, since Pilon’s next step as a Caps prospect will be the NHL Rookie Tournament later this week. He was enthusiastic in speaking on it, mentioning that he’s “really looking forward to it, it’s the first step in a sort of NHL debut kind of way, and I’m excited to make the most of it. There’s always a little bit of nerves but that’s kinda good, to hopefully give you a little bit of an edge.”

Being that the Development Camp is such a small percentage of the gentlemen’s rink time throughout the season, it makes sense that the level of organization would have to be pretty intense, to offset the disadvantage that a team inevitably has when they’re limited to such fleeting time as a group. With the upcoming NHL Rookie Tournament in Florida, this will be a shared experience across the board regardless of which team a skater represents. We asked about the process of getting back into the groove of sharing a rink with his Capitals teammates, seeing as they’re all coming from a variety of different places, with different skills and levels of experience, and a million different tendencies that will have to become intuitive between teammates, even though most of them haven’t shared a rink in over 2 months.