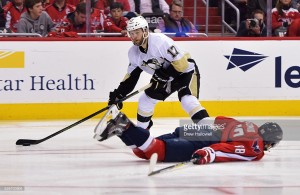 Down 1-0 in the series against the Washington Capitals, the Pittsburgh Penguins looked to tie the series and head back to the Steel City with momentum on their side. It would be a feat that they eventually accomplished. Game 2 would be no different in terms of flare and heated competition between two arch-rivals. The hits would be fierce and the edgy play would continue to ensue throughout all three periods.

The first period was not very impressive on the Caps part. The Penguins dominated puck possession and offensive zone time in the Capitals end, but Braden Holtby stood tall and may key save after key save to keep the contest netted at zero heading into the first intermission. The crowd at the Red House was not impressed with the Capitals’ effort and could only hope for better in the second stanza.

The hopes of Caps Nation were again tested when Carl Hagelin scored an impressive tip in off a pass from Nick Bonino that gave the Penguins the opening tally of Game 2. The Capitals were playing with fire by not getting any offensive zone time and it finally cost them and their efforts of playing catch-up would have to be ignited to get back in the game and give the passionate Caps fan base something to cheer about. The Capitals would have to kill many penalties, making their goal of tying the game that much more difficult. The second intermission would begin and the Capitals would have only twenty minutes left to develop momentum and seize Game 2.

The third period would begin and the urgency by the Capitals must be answered with a big goal. That goal would come on a power play with the simple play of just getting the puck to the net and hope for a dirty rebound would turn up huge for the Capitals. A point shot from defenseman John Carlson would make its way to Penguins goalie Matt Murray and Marcus Johansson would tuck the puck to the back of the net, sending Verizon Center into a frenzy and a much needed boost for the Capitals chance of seizing a 2-0 series lead.

When this goal was scored there was still so much time in regulation left that if the Capitals slipped up just once it would dearly cost them. That nightmare became reality with only five minutes left in the game Eric Fehr, a former Capital, beat Braden Holtby to give the Pens a 2-1 lead. The Capitals would pull Braden Holtby to get six attackers on the ice and pepper the young goalie Murray with any clear shot they could take. It would not be enough as the Penguins would skate outside of D.C with the series tied heading back to Pittsburgh for Game 3 and 4.

This will be the most adversity the Capitals have faced all season and will truly test the character as a team and an organization. It’s simple, the Capitals cannot lose to the Penguins. A season so successful cannot end at the hands of their bitter rival. The world won’t end if they do lose however, but it will be yet another heart-piercing defeat for Caps Nation and will be considered another playoff plague in the history of the NHL’s most snake-bitten franchise.