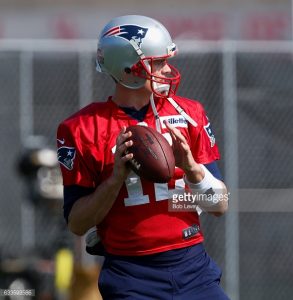 Let’s not forget that he is a 12-time Pro Bowler as well. Brady is the best quarterback of all-time because he achieved so much with different players on offense.

It’s no secret that Brady has been throwing to a revolving door of receivers since he entered the league in 2000. For some reason, he always gets a lot production out of each receiver who comes to Foxborough.

These are not household names, folks. Some people say Brady is successful because he played in the same system for his entire career. Indeed, Patriots head coach Bill Belichick has been Brady’s coach since he came into the league.

Even with new faces each year at the receiver positon, the Patriots’ offense was still lethal. From 2009-2016, New England finished with a top-10 offense seven times. In 2014, it had the 11th-ranked offense.

Brady did play with some great players like Randy Moss, Wes Welker, Troy Brown, and Deion Branch. And the 39-year-old still plays with Rob Gronkowski and Julian Edelman.

When you think of the great quarterbacks in NFL history, most of them played with superstar tight ends and receivers throughout most of their careers.

For example, Peyton Manning threw to Marvin Harrison and Reggie Wayne. Joe Montana had Jerry Rice, and Troy Aikman had Michael Irvin. Moss, who is considered one of the best receivers of all-time, only played with Brady from 2007-2010.

Brady is the best quarterback of all-time because he achieved so much with players who did not have a lot of success with other teams. The four-time Super Bowl-winning quarterback always finds ways to win.