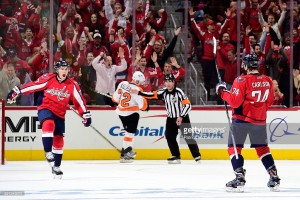 Game 1 was a brutal exhibition of menacing physicality and hostile tension between two teams that have nothing but ill will for one another. Many fights and edgy hits ensued, a preview of what will be a dirty series no matter how long it lasts. It is pretty inevitable that Brayden Schenn and Tom Wilson will drop the gloves, that Ovechkin will level more Flyers like he did with Couturier, and that both Braden Holtby and Steve Mason will have excellent save percentages.

Verizon Center was as loud as ever when both John Carlson and Jay Beagle scored, all that was needed for the Capitals first shutout win of this postseason. Holtby stood tall and made impressive saves that kept the Flyers from denting the twine, something I expect to see throughout the series and hopefully beyond. Role players like Mike Richards and Justin Williams did their duty of winning board battles and fore checking relentlessly, a facet of the game they’ve mastered before and after Richards suited up in the Red. Brayden Schenn made cheap dirty shots against Karl Alzner and Evgeni Kuznetsov, a player that I hope Tom Wilson will take care of.

I expect all of these assets of Game 1 to be consistent throughout the entire series and tensions only to escalate. The Capitals have thrived off both physicality and speed the entire season and have matched up impressively against the opponents’ top lines and goalies. Manipulating Steve Mason shouldn’t be any different and making him uncomfortable in the crease is essential for the Capitals to win this series and move on to face either the Penguins or the Rangers. I believe the Capitals are the better team and will dispose the Flyers in five, but it wont be easy by any means due to Philadelphia’ s dogfight mentality and their strong will to win.