The Stanley Cup Playoffs are finally upon us! If you haven’t already done so, join the NHL.com Bracket Challenge. It’s basically the NHL’s version of a March madness bracket. Speaking of brackets, mine was terrible, however I expect different results from my Stanley Cup bracket. I will be using my bracket as a basis for this article and I have pointed out a few individual matchups that will overall decide who wins the Stanley Cup.

So here’s my bracket. 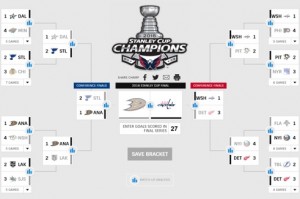 They key matchup in the first round to me is between the St. Louis Blues and Chicago Blackhawks. We all know that Chicago has been the dominant force in the Western Conference for years, however they have the pleasure of facing a white hot Blues team in the first round. Chicago has been in a bit of a rut lately compared to St. Louis. If you look at both teams they both bring a high powered top-six forward corps, a strong defense, and solid goaltending. This season, Chicago has had better goaltending overall but Brian Elliott has a brick wall lately. This matchup in my opinion could truly go either way. It’s going to come down to who’s hot at the right time and I feel like St. Louis could pull off what some might call an upset over the lower-seeded Blackhawks.

In the second round, there are two matchups that I predict will happen and the winner of those matchups will be the champion of their respective conference.

After defeating the Flyers rather handily, the Washington Capitals will have to face a team that had them stumped all year and many playoff series’ of the past. The Pittsburgh Penguins seem to be the only Eastern Conference team capable of sending the Capitals home, and making Twitter go crazy with Crying Jordan memes of Alex Ovechkin. The Penguins just seem to match up perfectly with the Capitals. They have played a speedy game with crisp playmaking since Mike Sullivan took over as the head coach. This stifled the Capitals heavier style of play all season long. However there is one key to the Capitals that is going to be the reason that they will ultimately beat the Pittsburgh Penguins in this series. I had the Pens winning this series up until I realized that the Capitals have only lost four out of any set of seven games once this season and that was when they lost five of their last seven after clinching everything there was to clinch. The Capitals should win this tough series in the end due to their ability to recover from losses and fix their errors when they occur. After that, they should handle Detroit and find themselves in the Stanley Cup Finals for the first time since they lost to those Red Wings in 1998.

Over on the West Coast, California to be specific, I have predicted a second round matchup between the LA Kings and Anaheim Ducks. They should both handle their first round matchups against the San Jose Sharks and Nashville Predators respectively in about five games. San Jose and Nashville simply are not built to compete with teams built for the Playoffs like LA and Anaheim.

LA and Anaheim both have sights set on the cup this post-season. LA missed the playoffs last season following their Stanley Cup victory over the New York Rangers but they have returned in a big way. Anaheim, like Pittsburgh started off the season very poor and many people called for the firing of Head Coach Bruce Boudreau. Anaheim didn’t fire him, and they finished the season off just like they should have started it. This series is going to come down to Special Teams, and Anaheim has a humongous advantage. Anaheim is ranked first in the NHL in both power play scoring percentage and penalty killing (who ever would have thought a team coached by Bruce Boudreau would be a top PK team). Their strong special teams is going to take them all the way to the finals after they finish what could be a tough series with St. Louis.

Well here we are, two franchises starved for success. The Anaheim Ducks are playing for the Stanley Cup for the first time since they defeated the Ottawa Senators in the 2006-07 season. The Capitals are looking to bring Washington, DC its first major sports title since the Redskins won it all in the 1991-92 season.

Let’s break this series down comparing each team by special teams, goaltending and firepower.

This series pits two teams that are in the top five in both power play and penalty killing. For the majority of the season Washington was the top-ranked team on the power play, but it went cold down the stretch and finished fifth. Washington surprisingly improved in penalty killing as the year went on and actually finished as the second best team shorthanded. The only team ahead of them are their opponents. Anaheim as previously mentioned finished first in both categories.

Predicting Anaheim’s goaltending situation might be even tougher than predicting the Stanley Cup winners. Bruce Boudreau has stated that both goalies will play at some point in the playoffs, however he has not decided who will start the first series. He has gone with a two goalie system most of the season due to injuries to Frederik Andersen. In reality, he can’t go wrong with the goalie he decides to go with as young goaltender John Gibson played really well this season, even being named an All-Star. The Capitals on the other hand will be riding Vezina trophy hopeful Braden Holtby all the way to the finals. Holtby tied the great Martin Brodeur’s record for wins in a season and has been dominant this season. No contest here.

Getzlaf and Perry against Backstrom and Ovechkin. This will be a lot of fun. However now both teams have incredible second line centers as well in Ryan Kessler for Anaheim and Evgeny Kuznetsov for Washington. In terms of points, the Capitals stars outrank the Ducks by far. Kuznetsov finished the season tenth, Ovechkin fifteenth and Backstrom sixteenth. For Anaheim Getzlaf and Perry finished thirty-second and thirty-third. Alexander Ovechkin also paced the NHL in goal scoring for the fourth consecutive season. Getzlaf actually struggled to put pucks in the net this season. Known more as a playmaker, Getzlaf scored only 13 goals, the second-lowest total of his career.

So there we have it. The Capitals win their first ever Stanley Cup. The only team I see possibly standing in their way in the East are the Penguins but due to injuries they may not even get past the first round. If they at least have their goaltender Marc-Andre Fluery, then they will be an issue. The Western Conference is chock full of great teams that could contend, so that half of the bracket was definitely the hardest to predict.

Just for giggles, I predict the winner of the Conn Smythe trophy as Playoff MVP to be Braden Holtby. Goaltending is by far the most important piece for a Championship team and Holtby has been the best goalie in the league this season.