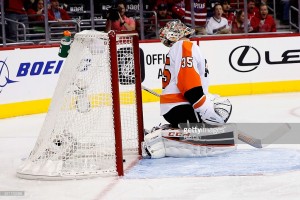 The Philadelphia Flyers and the Washington Capitals faced off in Verizon Center last night in downtown D.C in what turned out to be another hostile contest between both teams. The Capitals would fight and claw to a 4-1 win against the orange and black to take a 2-0 series lead heading into the Wells Fargo Center in Philadelphia. With plenty of drama and excitement, Game 2 was an intense exhibition of brutality and speed.

The Capitals got the party going first with a wicked wrist shot from the blue line courtesy of John Carlson on a Caps power play in the opening period. Carlson’s goal bred plenty of momentum and fired the crowd up in the Red House. Plenty of edgy play ensued heading into the second stanza, demonstrating another example of why these two teams just can’t stand each other The second period would be no different.

The Capitals would strike gold in the second period on what was perhaps the flukiest goal in the history of the NHL. The simple attempt of just getting the puck out of the Caps defensive zone and Jason Chimera chipping it in deep from center ice for a line change turned out to slide under Steve Mason and enter the net. There was no bounce or deflection, just a sliding puck at a reasonable speed that Mason simply just mishandled. Even though Jacob Voracek slid a puck under Braden Holtby’s right leg pad to make the score 2-1, Mason’s embarrassing error would be the beginning of the end.

Alex Ovechkin would dent the twine for his first goal of these Stanley Cup Playoffs by doing what he does best, a riveting slap shot from the point to blast the puck past Mason and give the locals a 3-1 lead over the children from Broad Street. It was a perfect assist from Nicklas Backstrom, a pass from the opposite half wall through Oshie’s legs in the slot and eventually behind Mason, which erupted the Red House heading into the third period.

The third period was just as intense with plenty of physicality including Brayden Schenn being leveled by John Carlson, who was actually the receiver of the check, and being stared down and daring him to come back up. The Flyers never took their gas off the pedal, committed to making an improbable comeback. Those dreams were later diminished when Nicklas Backstrom scored a crucial insurance goal to propel the Capitals to a 4-1 lead, all that was needed to lock up Game 2.

Heading into Philadelphia for Game 3 and 4 for what will be an emotional and electric atmosphere due to the passing of longtime owner Ed Snider, the Capitals must stick to the script that has led them to success all year. More shots on goal and better starts will be needed on the road to claim victory over the Flyers as well as cooler heads to stay out of the penalty box. If the rest of this series emulates Game 1 and 2, we will witness a true classic between two rivals that have nothing but distain for one another.