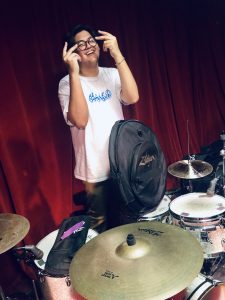 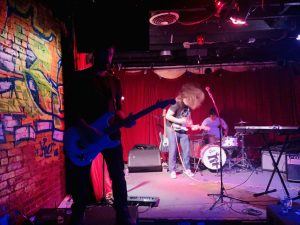 On Thursday, September 5th, 2019, indie grunge band, Touch the Buffalo, performed a powerful set in Washington, D.C. on U Street’s Velvet Lounge. Sharing the stage with three other bands, Touch the Buffalo closed the night off with tunes from their latest album release, Heart Is For (2019). Not only do these guys go hard on stage, but they’re changing the game of grunge with a ferocious electric ukulele, notable in “Heart is For,” the first track from their self-titled album of this year. They slowed things down with another track from their latest release titled, “Nerd Love,” a vigorous anthem embellished with spiffy guitar riffs and pounding rhythms materializing from the drums. The crowd in D.C. that night was incredibly supportive and vivacious during the set, cognisant of the bands successful wave throughout the indie rock world. Not only that, but Touch the Buffalo is local, with early roots based in Arlington, VA. They’ve become recognizable by fans throughout the D.C. metro area. The band has already performed at numerous venues in the nation’s capital and surrounding areas, including George Mason University for the annual Plazapalooza Music Festival hosted by the Music Productions Club of GMU earlier this year. The drummer of the band, Jonathan Ibarra, is also a regular contributor for WGMU and the DJ and host of The Taco’s Mix on WGMU Radio. The band has also released over 200 promo copies to college-radio stations around the nation. They’re up and coming- and deservingly so. Touch the Buffalo is one of many bands in the local music scene that’s making big strides in the alternative/grunge rock genre. To get more updates, you can follow the band on Facebook, Instagram, and Twitter.

You can now listen to tracks “Heart is For,” “Nerd Love,” and more on WGMU Radio. Your Voice. Amplified.