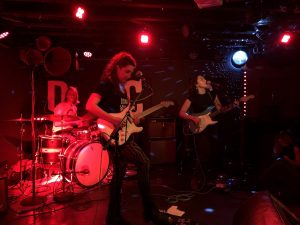 On Thursday, April 18th, 2019, Chicago’s finest took the stage at DC9 Nightclub, generating pleasantly noisy soundscapes through Washington D.C.’s already bustling 9th Street. That band is known as OHMME, a two-piece rock band consisting of musicians Sima Cunningham and Macie Stewart. The night opened with Bottled Up, a D.C. based punk quartet that ripped through rambunctious garage fusions accompanied with familiar, but refreshing vocals. Their most recent album, BU2 (2018), flashes me back to the rowdier moments in my youth as I navigated my way through the ever-changing local punk scene, so believe me when I say, I’ve had this album on repeat since.

OHMME began their performance with the songs, “Icon” and “Liquor Cabinet,” some of the most prismatic harmonies off their debut studio album, Parts (2018). There’s nothing that makes me appreciate musicians more than witnessing how they translate their recordings on the stage. Maybe I’m just overly dramatic, but OHMME configured their euphonic lyrics into some of the most lively and angelic melodies I’ve heard this year in the nation’s capital. Even in some of their more feedback-inducing tunes such as “Grandmother,” every turbulent and explosive electrical warble blaring from their guitars was beautifully rhythmic. The duo also performed their own roaring take on a B-52’s classic, “Give Me Back My Man,” a jam limited to 545 hand-numbered copies pressed on a bright orange 7” vinyl. Luckily, I managed to take one home that night. As OHMME assembled the loopy and glazy riffs of “Woman,” from their self-titled EP released back in 2017, I spotted a familiar face in the crowd: Bob Boilen, the creator and host of NPR’s Tiny Desk Concerts and All Songs Considered! Boilen carefully maneuvered his way around the stage, photographing the energetic artists; capturing the boisterous, as well as the most tender moments of the show.

One of the most vivid tracks from Thursday night was “Fingerprints,” as Cunningham and Stewart bounced multiplying echoes, atmospherically throughout the chorus. The final moment that transported me through an ethereal cosmos was in “Sentient Beings,” the seventh track off their latest album. Every hit on the drum, slash through a chord, or bow to the violin was pure, weightless resonance. It has always been their asymmetric rhythms, buoyantly recoiling through my ears that shaped my admiration for experimentation. That could be the explanation for why I had once kept Ohmme (2017), on non-stop repeat to this day.