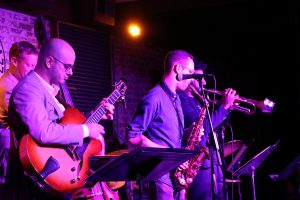 On Tuesday, September 17th, 2019, New York based saxophonist, Owen Broder, took the stage with his ensemble in Georgetown’s hidden gem, The Blues Alley. Broder and his group captivated D.C. jazz enthusiasts by celebrating the 60th anniversary of Back to Back (1959) and Side by Side (1959), two incredibly phenomenal recordings by some of the most influential jazz musicians of all time: Duke Ellington and Johnny Hodges. Broder coined this performance “Hodges and Duke,” an homage giving new life to these historic tunes in the 21st century. Broder and his ensemble played two sets that night in the nation’s capital; both with honest elegance and poised dynamism. I’m not one to frequent jazz shows in the city, if anything, my experience with any sort of saxophonic composition stems mainly from passing buskers every now and then or getting funky with acid jazz loops on an occasional commute. The Hodges and Duke show redefined what little I knew about the genre, all while transporting me back in time and space. Illuminated by an indigo spotlight, the post bop flutters that Broder twitched on his sax were ethereally nostalgic. I felt as though I was in a dim, 1950s, NYC comedy club sipping on scotch and puffing a slim, illuminated by a single candlelight, all while longing for someone or something. Broder and his ensemble said so much without vocalizing at all. The transcendental melodies from the sax, powerful flecks on the keys, and subtle pulses on the bass, collectively encapsulated the blooming comfort of the polyrhythmic, musical tetris that we know as jazz. Broder and his ensemble recontextualized the spasms of vitality and pep in these albums in a way that formulated both a sense of togetherness and cognizance of solace, all while creating a renewed sense of appreciation for music within the human experience. Jazz whispers and declares, often simultaneously, and Broder organically exemplified that in the Blues Alley that Tuesday night.