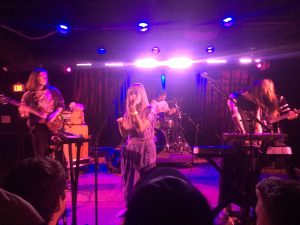 “Don’t die for me, live for me!” shouted Sarah Midori Perry, the lead singer and aesthetic force behind the electro noise-pop trio Kero Kero Bonito. Kicking off the release of their sophomore studio album, the London-based trio-gone-rock band just touched the nation’s capital at the MilkBoy Arthouse in College Park, MD. Luckily, WGMU was able to catch a glimpse of the live performance the indie pop-rock outfit offered on stage and in person.

Starting the show, the crowd heard “Outside”, the intro song to their latest album, Time ‘n’ Place (2018). This gritty rock pop tune would serve as a sonic theme throughout the show with its distorted guitar and heavy bass spilling into their next two most famous songs, “Lipslap” and “Flamingo”. These two bubblegum pop singles from the earlier, punchy years of KKB were given a rock twist that converted simple head bopping ballads to headbangers with the addition of a bass, guitar, drum set, and tenacious vocals. Frankly, had anyone else but Gus and Jamie tried to do this, it wouldn’t have worked, but the off and on-stage chemistry of the group was so prevalent and passionate that the new interpretations were something the crowd loved and have heard before but now wearing a fun, hardcore mask. The catchy melodies of old were just as catchy that night, but instead of just singing along, everyone joined in and moshed the night away!

Throughout the evening, there was a pattern in the songs – one song was from the new album, then two or three songs from past albums, but with the new rock twist. From their first studio album, Bonito Generation (2016), singles like “Fish Bowl” and “Picture This” were played live and remastered with hard rock guitar and bass solos, causing incredible mosh-pit action amongst the crowd. This was a refreshing rendition that gave the audience a creative new interpretation to fond over. It was not just the group regurgitating what the audience probably listened to non-stop and on repeat the previous days and weeks – it was a whole new Kero Kero experience that many would likely pay to see again.

The band, specifically the guitarist, would hold his guitar out to the crowd for them to strum and play wildly after songs like “Only Acting”, which ends in an experimental noise: car crash. This gives each and every venue its own unique little experience where one feels connected to the act rather than just seeing the artists pick up instruments, play music, and leave. Throughout the show, the entire act was smiling, enjoying themselves, having snacks and just being musicians that love doing what they do – performing music!

At the end of the show came the most hardcore event of the night! After a chant for an encore ended, the band re-emerged from backstage to come up and perform “Trampoline” from Bonito Generation, but with growls and yelling. Man, oh man. The crowd went absolutely wild, and even the opening act came out and started moshing along. Another pleasant surprise!

This entire show felt like it was an ode to the fans. The latest album dredged through some deep, dark topics, lyrically and sonically, which were tough for the band, but they came on stage, giving the fans a big hug for getting them a new record deal, a new North American tour, and a warm reception to their new musical direction.

The show was an experience uncaptured by their previous albums. If you are into noise pop and alternative rock, this show would be great for you! You won’t ever see anime cosplayers and shoegazers moshing like that.