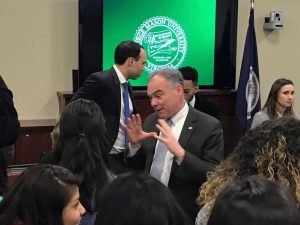 On Friday February 10th, former Vice President nominee and current Senator of Virginia Tim Kaine returned to George Mason. He came in the fall, accompanied by Joe Biden, to promote the Clinton-Kaine ticket. Now, after the conclusion of the election, he came not for self-promotion, but to speak about the new administration’s recent ban on seven Muslim majority countries.

Prior to the entrance of Tim Kaine, the room was quiet. Hushed conversations peppered the space as Angel Cabrera; President of George Mason peered into the room every few minutes, allowing the audience a glimpse of his festive yellow shirt and green tie.

Many feel that the diverse and international student body is what enriches the student experience here. 87 students at George Mason are from the seven countries targeted by the ban. Hadeel Al-Tashi, a Yemeni graduate student, speaks about the hardship her family members in Yemen are experiencing due to the war and resulting displacement. She speaks of scattered families seeking refuge prior to the executive order, and how this ban has impacted human lives. She emphasizes the human aspect of the issue. She stressed that policies are not simply on paper, but are causing people to suffer. Here is her speech:

Sitting in the front row was Najwa Elyazgi, a Libyan George Mason student who had only recently been able to return to the U.S. She spoke prior to the Senator, detailing her experience. She conveys the harrowing feeling of not knowing whether she would be able to return to her studies. As she waited for information about whether she could return and communicated with her lawyer, she spent her time sequestered in a hotel, applying for other universities. She sent applications out of the fear and real possibility that she would be unable to ever return to George Mason. After a week of uncertainty, her brother called her in the middle of the night with the news that a federal judge had put a hold on the ban. She immediately booked a plane ticket to the U.S. A stark contrast to the executive order that kept her away, she recalls a CVPA official in the U.S. on her arrival saying “welcome back, we missed you”. Here is her speech:

Senator Kaine begins his speech by noting the inherent American value; talent from around the world is what energizes our country. When the ban went into effect, Senator Kaine was in Blacksburg. Even in an area not assumed to be a home of immigrants, the community there is connected to families affected by President’s Trump’s executive order. Senator Kaine learned of a Syrian family that had become important and loved members of the community. This family spoke of another Syrian family coming to live with them that had been in a “refugee camp in Jordan for four years being vetted”. Despite having successfully completed the lengthy vetting process, they could no longer enter the country. The small Virginia community ready to welcome this family would have to wait, as the family was detained due to the ban. In Many other areas of Virginia Senator Kaine visited, there was a great deal of uncertainty about how members of the community from the targeted countries would be affected. Here is his speech:

Tim Kaine remarks that while the administration denies accusations that this executive order is a Muslims ban, the ban affects Muslim majority countries, but has provisions for religious minorities – meaning provisions for non-Muslims.

He recognizes the issue with the ban turning away green card holders, or permanent legal residents. It should cause one to question whether those who follow the legal entrance process into the US should be punished. He takes issue with discriminations based on religion and country this ban appears to promote. He criticizes the fact that the ban applied too broadly, restricting those who were already legal residents.

The Senator spoke fondly of those he saw protesting in airports, standing with welcoming signs trying to convey their message so that it would be received by those who felt anything but welcome.

He notes specifically the affect of this ban on universities, who house many international students and faculty. The wildly diverse audience nodded at this, feeling his point to be incredibly relevant to their experience, no matter their background.

The Senator closes by reminding us to have pride in the immigrant nation that we are, and to celebrate the strength of our diversity. In the diverse and international community that composes George Mason University, this event provided a venue for students to voice their fears, concerns, and their staunch dedication to working towards a more welcoming and inclusive community.