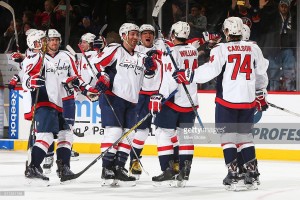 at the Barclays Center on February 18, 2016 in Brooklyn borough of New York City.

Caps fans are all too familiar with the agonizing defeat at the hand of the Montreal Canadiens the last time the Capitals earned the Presidents Trophy. Blowing a 3-1 series lead in the first round of the 2010 Stanley Cup Playoffs still stings both the fans and this proud franchise. One can’t help but brace for heartbreak if the Capitals possess the best record in the regular season. But this team is different, so much different.

With Stanley Cup Champion experience in Justin Williams, Mike Richards and Brooks Orpik, the Capitals now have a sense of calm in their locker room and a quiet humble confidence that is a trait much needed if one team wants to win it all. This Capitals team has an impeccable mental stamina and has already put past playoff disappointments in the past. The general media has been very impressed with the consistent winning efforts that Caps have displayed and according to Craig Laughlin this is the best team in the franchise’s long history.

The depth throughout all facets of the roster is a luxury the Capitals have never had before, even during their 2009-2010 Presidents Trophy season. When a player like Mike Richards is on your fourth line, you got something special. Barry Trotz has made gambles all year in manipulating and changing his lines and have had many positive effects throughout the entire season. General manager Brian MacLellan should be given all the credit in the world for being an architect of this special roster and allowing Trotz to do his job.

Even with all these qualities, Caps fans are still understandably bracing for a heart crushing playoff loss, but that doesn’t mean they shouldn’t be confident. The boys in red are playing better than ever and have a swagger that can intimidate any team that opposes them. It is one of those Stanley Cup or bust seasons in which the pressure and high expectations are mounting on the Caps shoulders, but one should not be surprised if they finally get that coveted Cup and cement themselves as one of the greatest teams of all time.