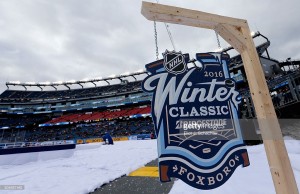 prior to the 2016 Bridgestone NHL Winter Classic between the Montreal Canadiens and the Boston Bruins at Gillette Stadium on January 1, 2016 in Foxboro, Massachusetts.

Ever since the 2008 Winter Classic between the Buffalo Sabres and the Pittsburgh Penguins at Ralph Wilson Stadium, outdoor NHL games have remained consistent as the leagues marquee event. Many thrilling moments in historic landmark locations such as Fenway Park and Wrigley Field have created memories and reminds us what makes this game so great. The first Winter Classic was a gorgeous spectacle and a mythological wonder within outdoor nature itself. It remains as a towering accomplishment for the NHL, a league ailing for more popularity in the United States.

Many hockey fans may think that adding additional outdoor games outside of the Winter Classic would dilute the mystique of the celebrated event, I disagree. Every outdoor NHL game has had a special personality to it and a level of entertainment that is hard to be duplicated. HBO’s 24/7 series captured these outdoor moments with riveting clarity and raw real hockey was displayed to the world.

The upcoming matchup between the Chicago Blackhawks and the Minnesota Wild will be the latest installment in the Stadium Series (the outdoor games outside of the Winter Classic). Two teams on the exact opposite side of the pendulum will face off at TCF Bank Stadium, the home of the Minnesota Twins. Many including myself expect a blowout victory for the Hawks, but it still should be a game worth viewing and respected by the general public.

Minnesota residents have a deep love affair with outdoor hockey, due to outside rinks formed by icy ponds. Hockey is in all Minnesotan’s blood and expect them to be still be passionate for their team who have been in a free fall over the last few months of this season. Facing the Stanley Cup Champions is a tough task for any team but the Wild may just be able to put their recent past behind them and earn two points. Either way it will be an event that deserves to be garnered by fans of all teams and non-hockey people as well who want to witness an event that should be cherished and respected.