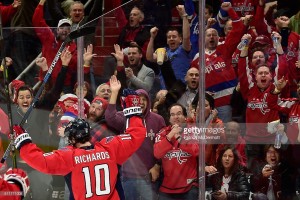 during their game at Verizon Center on February 22, 2016 in Washington, DC.

The Capitals won all four games last week to jumpstart their latest winning streak. Their most recent loss came in Dallas (the team the Caps haven’t beaten in eight years) ten days ago. The Caps have won nine of their last ten games including a couple of thrillers last week against the Kings of Los Angeles and the New Jersey Devils. Even the game against the New York Islanders went to Overtime.

Against LA, Phillip Grubauer played his best game as a Washington Capital and held the Kings to only one goal on forty shots. Their lone goal came on a shorthanded goal from Anze Kopitar. The Capitals were outplayed everywhere last Tuesday night in what could very-well be a preview of the Stanley Cup Finals. The Capitals tied the game on a deflection from Andre Burakovsky. The game winner came from Evgeny Kuznetsov and Jason Chimera sealed it with an empty-netter.

Last Thursday in Brooklyn, the Capitals got off to a 2-1 lead early in the second after a pair of Alexander Ovechkin tallies. Upon doing so, it seemed the Caps were on cruise control for the rest of the game but they allowed a late goal to Frans Neilson. Both Islanders goals were rather leaky for Vezina hopeful Braden Holtby. They both went into small spaces on Holtby’s glove side, shots he most likely wanted back. In overtime, however, the Capitals quelled the Islanders rally with a long rage slap shot from Justin Williams beat Thomas Greiss.

After Reid Boucher gave New Jersey the lead just past the half way point of the third period, the Devils seemed poised to knock off the first-place Capitals. However, in typical 2015-16 Caps fashion, they did not back down. A somewhat lucky goal by TJ Oshie tied the game about three minutes later. Oshie was on his knees with his back turned to Devils goalie Corey Schneider when he attempted to shoot the puck with his back hand. The puck was going to go wide left, but the skate of Devils defenseman Seth Helgesson deflected the puck behind Schneider and the game was tied. Two minutes later Evgeny Kuznetsov made another perfect pass, this time finding the stick of Brooks Orpik who scored to give the Caps the lead and they never looked back. The Caps downed the Devils 4-3. That goal turned out to be Orpik’s first ever game winning goal in his 798th game. The hard-hitting Orpik also assisted on the Oshie goal.

Monday night, the Caps extended their latest winning streak to four games after a victory over the Arizona Coyotes. The highlight of the game was Mike Richards’ first goal as a Capital. Richards was having his best game so far this season. He centered the third line in the absence of the ill Marcus Johansson between Tom Wilson and Jason Chimera. The goal came when the referee failed to blow the whistle after Coyotes goalie Louis Domingue appeared to cover the puck with his glove. Before a whistle ever came, Tom Wilson poked at the glove with his stick and that left an easy shot for Richards who buried the puck behind a confused Domingue. Ovechkin and Kuznetsov each had a goal and an assist in the contest.

During production of this edition of Caps Weekly, the Capitals announced that they have traded for Buffalo defenseman Mike Weber. The Capitals gave up a third round pick in the 2017 draft for the 28 year old blue liner. The Sabers are also withholding half of his $2 million salary, meaning he will only count $1 million against the salary cap for the Caps. For those that remember Tim Gleason, Weber is a very similar player with better possession numbers. The move is confusing to most as Orpik is healthy and Nate Schmidt has played well. They also just recently re-signed Taylor Chorney for a few years. Depending on the matchup, he could sub in for Dmitry Orlov or Nate Schmidt. Overall, he was acquired to be a depth defenseman for the stretch of the season. He is an unrestricted free agent after this season. It has also been reported that the Washington Capitals have interest in Andrew Ladd from Winnipeg. However, this trade leaves the Caps at fifty players, so a trade for Ladd would require the Caps to move a player or two to free up space as well.

Plays of the Week

Orpik is mainly included because his return has been a huge boost for the blue line. He brings a physical game every night and that was surely missed. He has mainly played on the third pair with Dmitry Orlov but should soon find himself in the first pair with John Carlson soon.