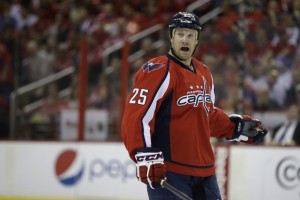 In their three games this past week, the Washington Capitals were able to post a 2-0-1 record against Philadelphia, Calgary, and Detroit. They earned standings points in all three games.

Last Thursday, the Caps traveled to Philadelphia to take on the Flyers. Down 2-1 approaching the half way mark of the second period, Jason Chimera scored a power play goal that set the tone for the Caps to really take control of this game the rest of the way. Prior to the game, Head Coach Barry Trotz decided to insert Jason Chimera into the second power play unit because he wanted more traffic in front of the net.This move paid off as Chimera recorded two power play goals.

To go along with the two goals from Chimera, TJ Oshie, Justin Williams, and Nicklas Backstrom also tallied goals in this game. Tom Wilson also played a really strong game as he had two assists, including one on the final goal of the game that started a beautiful Tic-Tac-Toe play that ended with Backstrom snapping a shot behind Flyers goaltender Steve Mason. Wilson came in hard on the forecheck and freed the puck from the Flyers defenseman. The puck found its way to Marcus Johansson who in turn passed it to Backstrom to finish the play and the Flyers with just over six minutes remaining in the game. The final score was 5-2 in favor of the visiting Capitals

The very next evening, The Capitals returned home to face the Calgary Flames. Philip Grubauer got the start between the pipes and made several strong saves to keep the Caps in this game. The Capitals got off to one of their patented slow starts as they failed to put a puck behind Flames goaltender Karri Ramo until almost six minutes into the third period when Michael Latta scored his first goal in almost two years for the Caps. It was a goal that brought the Caps within one of the visiting Flames and also had many fans extremely excited for their favorite fourth line center.

The Caps continued to push hard for the rest of the third period and it paid off when Jay Beagle tied the game with less than five minutes remaining. Unfortunately, 1:40 into the 3 on 3 overtime period, Sean Monahan beat Grubauer for his second goal of the game and the Caps fell 3-2.

For the second time in eight days, the Caps paid a visit to the Joe Lewis Arena in Detroit to face the Red Wings. Just like the first matchup, one in which the caps lost 1-0 on an impossible shot that found its way through Braden Holtby by Andreas Athanasiou, it was a battle of the goalies. The Red Wings struck first 2:48 into the game when Dylan Larkin beat Braden Holtby on the blocker side with a low wrister from the right wing. The Caps answered on the power play when Justin Williams deflected a pass from Matt Niskanen just under eleven minutes into the first period. Throughout the rest of regulation neither team could put a puck in the net due to some amazing play from Braden Holtby and Petr Mrazek. Only 00:45 seconds into the over-time period, Evgeny Kuznetsov continued his heroics by scoring the game winner and making sure his capitals got two points out of this 2-1 victory.

Third Star- Braden Holtby (1.50 GAA, 43 Saves on 46 Shots 2-0-0) – Holtby finds himself here mainly due to the absolutely incredible saves he made against the Red Wings Wednesday night, including one in which he reeled back to bat a puck away from crossing the goal line to keep the game tied.

Second Star- Evgeny Kuznetsov (1G, 2A) – He scored an amazing game winner in overtime against the Red Wings and also set up a pair of goals using his amazing playmaking ability including another one of his no-look-behind-the-net passes.

First Star- Jason Chimera (2G, 1A) – His performance fueled the Caps to victory over their rival Philadelphia Flyers.

Unheralded Star – Nate Schmidt – He did not record a single point but it should be noted that he has played exceptionally while filling in for the injured Brooks Orpik on the top pair with John Carlson. Schmidt has played well by joining the rush and has also had plenty of solid scoring chances.

Brooks Oprik- After missing the past three games with an injury, he could return to the lineup Thursday night against the Dallas Stars. If not, then do not expect him to be out of the lineup for too much longer.