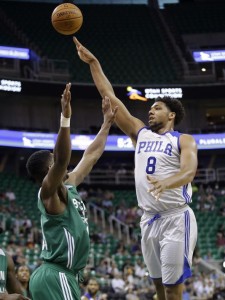 Okay, so maybe the Philadelphia 76ers are tanking for the third consecutive year. They will not be competing for a seed in the playoffs this season, but they do have young talent. Their franchise player is rookie center Jahlil Okafor out of Duke. Some fans think Nerlens Noel is the best player on the team. While the debate is arguable, Okafor has the higher ceiling and is already a threat to opposing teams.

Noel does have a lot of talent on the defensive end of the floor and has improved his play on offense, but Okafor’s offensive game is light-years ahead. The 19-year-old rookie out of Duke has a repertoire of low-post moves. He can score at will, and opposing centers are having problems with stopping him. Truth be told, he is the 76ers’ only threat on the offensive end of the floor.

Okafor’s defense leaves a lot to be desired, but the 76ers needed a presence in the low-post that could score. He and Noel complement each other very well.

So, that brings me back to my assertion that Okafor will win the Rookie of the Year award. Why is that? Well, he can simply score the basketball.

In 2015, Minnesota Timberwolves’ shooting guard Andrew Wiggins won the award while leading all rookies in points that year with 16.9, per NBA.com.

So, where am I going with this? Well, Jahlil Okafor will win the Rookie of the Year because he is going to finish the season as the leading scorer among rookies. Name me one team that is relying on their rookie like the 76ers are. You cannot think of one.

Sure, Karl Anthony-Towns, the rookie center out of Kentucky, is off to a good start in Minnesota. However, he is not the Timberwolves’ primary scorer. That title goes to Wiggins.

I know what you all are thinking, too. You all are saying that Towns is the better overall player and defender than Okafor. While that may be true and evident, voters do not tend to look at who is the superior defender when voting for Rookie of the Year.

They place a huge emphasis on points per game. If they did focus on defensive statistics, then Nerlens Noel would have won the Rookie of the Year in 2014 instead of Wiggins. Noel was by far the better defender who year because he was in the top ten in both the steals and blocks categories in the 2014-2015 season, per ESPN.com. However, Wiggins received the award instead.

Indeed, there are some talented rookies in the league this year like Towns and Lakers’ point guard D’Angelo Russell. Nevertheless, they will not have more points than Okafor this season.

So, Okafor will win the award because he is going to get the ball more. As of right now, he is averaging 19.2 points and 7.6 rebounds, according to ESPN.com. Okafor is averaging more points than any rookie in the league. He will have more of an impact on his team this season because he is the best scorer on his team.