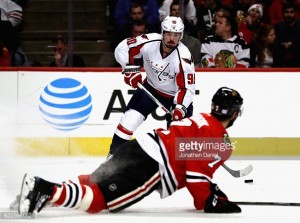 Last evening, the Capitals marched into the United Center to take on a mighty foe in the Chicago Blackhawks. A roster full of premium talent in Jonathan Toews, Patrick Kane, Duncan Keith, Corey Crawford, and many more helped Chicago ascend into a modern dynasty by winning three Stanley Cups in six years. In the salary cap era, dynasties are hard to build. All thanks should be given to Chicago’s brilliant general manager Stan Bowman, whom forever turned the franchise’s fortunes around and dug them out of the divisions’ cellar. Bowman constructed a masterpiece of speed, skill, and discipline that has made the Blackhawks ferocious and consistent Stanley Cup contenders for the better part of the last decade. Skating as the road team in Chicago is not an easy feat, but an experienced Capitals squad was not intimidated.

It would be a short-handed goal by Jay Beagle that quieted the Madhouse at Madison firmly. As the solemn organ echoed throughout the arena, Hawks’ fans felt troubled as they witnessed the momentum shifting dramatically in favor of the visitors. It wouldn’t take long though for the Blackhawks to respond on their power play as Brian Campbell shot a howitzer over Braden Holtby’s left shoulder tying the game at 1.

The first period however would not end in a tie as Jay Beagle would notch his second goal of the game with a filthy wrap-around goal that fooled Crawford and forced the Blackhawks to play catch-up once again. The second period would remain a stalemate with neither team denting the twine. The third period would start with the Hawks still down by one looking for that vital tying goal and a way back into the game. That tying tally would come late in the third when Marian Hossa chipped the puck past Braden Holtby off a juicy rebound shot from the point with only 22 seconds remaining in the contest. It would need overtime to decide who earns those intensely desired two points.

Chicago would dictate the first minute of 3-on-3 overtime dominating puck possession and forcing the Caps to play on their heels. Tape-to-tape passes helped conduct the Blackhawk’s offensive zone cycling schemes and neutral zone entries. With so much ice available to enable plays, defenses are accountable for playing 1-on-1 coverage and prevent as many shots as possible. The Capitals would eventually gain that valuable puck possession with Dmitry Orlov and Marcus Johansson rushing through the neutral zone towards Corey Crawford at an exceptional speed. When the time was right, Orlov made a beautiful slick pass to Johnasson who unloaded a wicked slap shot past Crawford and inches under the crossbar. The Capitals would instantly celebrate with elation as they earned a hard-fought victory over a great team in their hostile arena. The Capitals will play the Carolina Hurricanes the following evening at the Raleigh Center where Carolina awaits with a rested lineup. It’s still very early into this season but Caps fans should be very excited about this team’s prospects in the future after they witnessed a valiant effort in Chicago against a team that has done it all before.