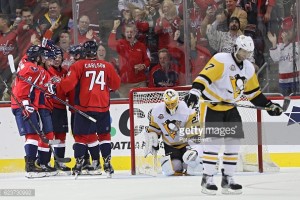 Before this epic matchup between these two heated rivals, the Washington Capitals had dropped three of its last four games and struggled to generate offense. After a demoralizing overtime defeat to the Columbus Blue Jackets on the road, the Capitals were determined to claim the later half of this back-to-back game swing with an uplifting home victory. That determination would lead to success as the Capitals stomped on the Pittsburgh Penguins 7-1 in front of a packed Verizon Center.

A short-handed goal by the Caps captured that much-needed initial momentum and made the Red House loud right from the start. A beautiful tip pass from T.J Oshie to Jay Beagle gave him a breakaway towards Penguins goaltender Matt Murray with exceptional speed. Matt Murray would make a terrific save off a Beagle back-handed shot attempt, but T.J Oshie found that juicy rebound and shoveled the puck past a hopelessly sprawling Murray. This goal would be the first of six unanswered Caps goals in what was a cruel and pitiful beating of those birds from Pitt.

Nicklas Backstrom would score the second of that impressive goal streak with a filthy screened wrist shot that entered the net through Murray’s 7-hole in a goal he would like to have back. The Capitals first period offense wasn’t over just yet as Oshie floated around in the crease patiently and chipped in a dirty garbage goal 07.9 seconds left in the opening stanza.

Matt Murray would not start the second period with the Penguins as he took an errant stick in the eye following a post-whistle scrum between Evgeni Malkin and Karl Alzner. The stick belonged to Malkin and the contact was unintentional. Another reason Matt Murray may have been substituted was because Penguins head coach Mike Sullivan was trying to ignite a spark in the team and motivate them to play better. The move would make little difference even after a terrific save by Marc Andre-Fleury on Lars Eller as the Capitals offense just kept attacking mercilessly. Dmitry Orlov would make the score 4-0 with an accurate shot as he was cruising through the vacant slot unguarded in the Penguins’ zone. A power play would be given to the Capitals and Justin Williams would capitalize on it and give the Caps their last goal of the period. The second period would end with a 5-0 Caps lead and left the Penguins walking dejectedly towards their dressing room.

The third period was another scoring frenzy for the home team pleasing the Caps faithful in the chaotic Red House who were witnessing their hated rivals being perished gloriously. It was only a matter of time for Ovechkin to get his share of offense as he deked past Fleury on his signature powerful breakaway that can terrify any goalie. While he pushed the puck past the goal line he also pushed Fleury into the net and added insult to injury. The Penguins would thwart Braden Holtby’s shutout when Phil Kessel gave the Pens their only tally in the game as he followed through to a puck that drifted through Holtby’s five-hole. But the Capitals wouldn’t let the fans leave quietly as Nicklas Backstrom elevated the puck remarkably over Fleury’s shoulder in what looked very familiar to his previous score.

Tonights game was a statement game for the Capitals. With a team that was struggling to score, the Caps wanted to send the message that the team could turn its offense around starting with a win against a strong divisional rival. The message was sent and now Washington sits on top of Pittsburgh in the divisional standings only behind the high-powered New York Rangers for first place. The NHL season is long and up-and-downs are bound to happen for any club in a league full of so much parity. Last nights game gave the Capitals fan base optimism that this current lack of scoring trend will be diminished and that consistent winning will find its way back into the organization. The time is now for the Capitals to get hot and get as many points as possible to boost the self-confidence of the team and play the best when it matters most.