WILTW Week 5 in The NFL 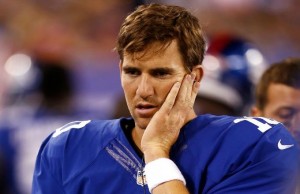 This week in football we saw the undefeated teams remain undefeated. We saw one of the league’s elite running backs go down for the season. We saw Eli Manning rally in primetime. His brother, Peyton on the other hand struggled, but remained undefeated. Big Ben turns out is still heavily involved in that offense, drawing up plays for Mike Vick on the sideline. Houston still remains in a state of (explicit). That quarterback situation is worrisome for Texans fans.

The Undefeated Teams –  The Patriots and Packers are on a completely different league compared to the rest of the league. Possible Super Bowl matchup? Bengals rally from a 24-7 halftime score to win the game in OT against the Seattle Seahawks. Are the Bengals for real this year? The Broncos rely on their defense to beat the Oakland Raiders. How much longer can this defense bail Peyton Manning out of his below par play?

The Atlanta Falcons had a close call at home to beat the Washington Redskins in OT. The Redskins have proven to be a more competitive team than people gave them credit for in the preseason, but does Atlanta have the defensive powers to keep the likes of Aaron Rogers out of the end-zone? They have only faced one elite quarterback in Eli Manning this season and if it hadn’t been for poor clock management, the Falcons may very well not be undefeated. As for the Panthers, they had a bye week and now face a desperate Seattle Seahawks team in Seattle. Expect a low scoring game and the Panthers to fall to 4-1.

Eli Manning – In the words of Deion Sanders; “I believe in Eli!” What a performance by the two -time Super Bowl MVP on Sunday night. Apart from the pick at the end of the first half, Eli looked sharp. The game winning drive was absolutely masterful. For most of that final drive, Manning did not have the services of Reuben Randle and Odell Beckham Jr., but he did have Shane Vereen. The ex-Patriot has proven to be the best off-season acquisition for the New York Giants thus far.

Eli gets the Giants to 3-2 and on top of the NFC East. But as we all know, that division is known to have its ups and downs. So can Eli and the Giants keep up the momentum and take the division?

Peyton Manning – Oh Peyton, those Papa John’s pizza’s sure have slowed you down. Good thing your defense is in outstanding form. Everyone is panicking, saying that Peyton is done, but don’t defenses win you championships? Granted, Peyton has not been playing at a Peyton Manning level, but that defense is strapped! He hasn’t had to do much because of how good that defense is. The focus though is always on the play of the quarterback.

So for Peyton Manning, his game needs to be stepped up to silence all the doubters, myself included. As of right now, it looks to be his final season in the NFL as a player.

Ben Roethlisberger, The Coach – A boot leg to the left side of the field and a stutter route to Marcus Wheaton for a 72- yard touchdown. Had it not worked, we would be laughing, not lauding Big Ben for drawing up this play on the sideline for Mike Vick. Big Ben may not be on the field, but he has showed to have some value on the sidelines. Look for the Steelers to have him draw up a few more plays in weeks to come.

Vick may be doing an alright job so far, but don’t think for a second that this will become a quarterback controversy once Big Ben gets healthy. Although, that would be something the media would eat up. Regardless, the Steelers look to be in good shape in Ben’s absence and seeing their franchise quarterback remain active even when injured shows just how much he loves the game.