The Capitals’ roster currently doesn’t have a player who treats practices as a menial task like Allen Iverson. This is evident by the rigorous training held at Kettler Iceplex on the top level of Ballston Mall by all members of the team. Skating drills, tape-to-tape passing exercises, tip-in exercises, goalie screening simulations, goaltender routines, and many more make up what is a truly an explosive team meeting.

One thing you notice at Caps practices this season is that the players really like each other and enjoy each other’s company, always smiling and joking around amongst one another. This has also been shown when they have each other’s backs during game time in numerous occasions throughout the season and stick up for one another in usually a fisticuff nature. The chemistry is excellent within this Caps team, which is being hailed as the best hockey club in the team’s 41 seasons.

All coaches are highly involved in these practices, especially head coach Barry Trotz who observes the players with finite detail and is always willing to point out their flaws no matter how minute. The three assistant coaches are just as active, passing players pucks and setting up exercises to help the players develop certain skills and routines. It is a concerted team effort amongst the coaches to give the guidance the players need to perfect their game.

Both goaltenders remain in their creases and are not forced to skate at high speeds for obvious reasons, but their practices are still as demanding. Crease positioning, seeing pucks through screens and dealing with the inevitable playful taunting their teammates place on them, both Braden Holtby and Philip Grubauer face mental adversity throughout scrimmage. This is all due to the occupation they signed because being an NHL goalie is no easy feat, especially in the intense mental pressure that not only the game puts on them, but the pressure they place on themselves.

Caps practices are no easy-going and half-hearted occasions, they are intense and full of adversity the players must come to deal with. Trotz by no means cares about petty emotions, recognizing that his players are professionals and adults and have been passed that stage in their hockey life for awhile. If one wants to see how the best team in hockey got started on its winning ways, visit a practice and witness these excruciating exercises the players must overcome in order to be at their best when it matters most. 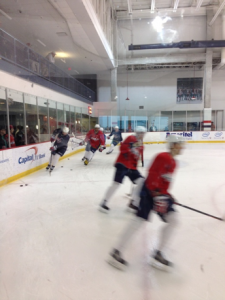 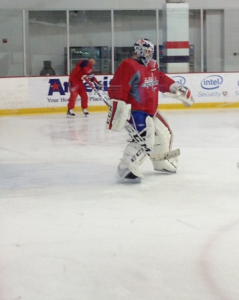 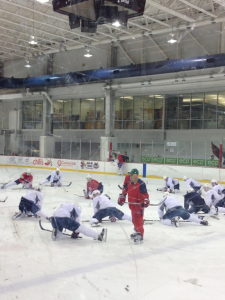