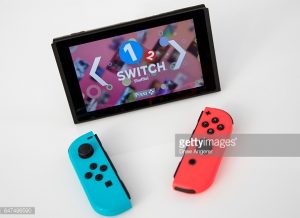 Friday, March 3 was the launch of Nintendo’s first console since 2011. The console is the Nintendo Switch. The Switch costs approximately $300. The console has a design that is comparable to no other on the market. The controllers slide on/off the sides of the screen allowing it to go from a living-room console to a mobile thingamajig. The screen size is 6.2”, which is easy enough to “throw” it in a bag to use while commuting to school or work or to “throw” in a tote bag to go play it in a park, just as people did when Pokémon Go was released. The Nintendo Switch is also known as the Game Boy for grown-ups. When you turn the Switch into a mobile thingamajig, the battery holds out for about three hours, which is exactly what Nintendo has predicted. Three hours is great for commutes or when taking road trips. The Switch comes with a 32GB memory card, which is not a lot if you download a good number of games. Therefore, if you want to download a good number of games you want to consider purchasing a larger memory card at your everyday electronics store. Yes, Nintendo has some more things to do to make the Switch more attractive for most people’s disposable income. However, if Nintendo does make it more attractive, then it will be a hit in the markets.