The Plugs w/ Chris Camello of “The Rebel Media Group” 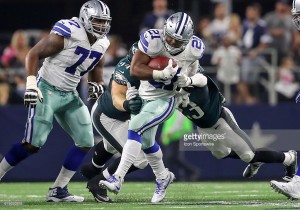 Although we’re not even halfway through this season, it’s fair to say that there have been many surprises thus far. The Vikings lost their quarterback and all-star running back, but are now one of the best teams in the NFC. The Panthers that reached the Super Bowl might end up last in their division, failing to duplicate any of the thrills they produced last year. Even with all of the shockers that have come up this year though, it’s fair to say the biggest surprise so far has been the NFC East.

Last year, the NFC East was an absolutely abysmal division. The Dallas Cowboys ended at 4-12 due to a collarbone injury to Tony Romo, which made him miss 8 games, all of which they lost. The New York Giants finished at 6-10 because they lost too many close games they could have won. This cost them not only a chance at the playoffs, but their veteran head coach Tom Coughlin as well. The Philadelphia Eagles finished at 7-9 as Chip Kelly traded away players like LeSean McCoy, an offensive weapon so powerful that he has allowed the Buffalo Bills to be relevant again, ensuring his release after an underperforming season. The Washington Redskins finished at 9-7 and were able to make the playoffs due to the atrocious level of competition in the division and the ability to not screw it all up. It was well known at the outset of last season that the NFC East was by all means a disgrace, which makes it all the more surprising how strong the division is from top to bottom.

It’d be one thing if the NFC East was simply average among the league in overall strength this year. After all, with how bad every team in the division was playing, it’s hard to get much worse. That said, every team in the division is playing thoroughly better football and I would go so far to say that every team in the division has a shot at the playoffs. The Dallas Cowboys are playing as one of the best teams in the NFC, potentially as one of the best teams in all of football. They have a fourth-round rookie playing like a Pro Bowler at quarterback, a rookie running back in Ezekiel Elliott who has been one of the best in the league, and an offensive line that is utterly incredible. The Philadelphia Eagles were expected to be horrific this year, but Carson Wentz has Eagles fans excited, as people see a lot of potential for him in coming years. The New York Giants have two-time Super Bowl champion Eli Manning along with one of football’s best young receivers, while the Washington Redskins have weapons yet to be utilized fully every week. The Cowboys could win the division with how they are playing and either the Eagles, Giants, or Redskins could join them as well. This division is a force to be reckoned with.