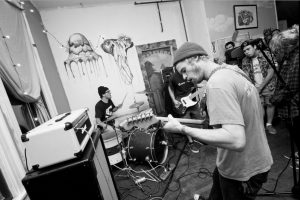 The night was jam-packed with some of the hottest emo bands in the scene right now.

The indie/emo band that promotes themselves as “meme rockers” came to Washington DC on Nov. 2 to play a very stacked set at Songbyrd Record Café and Music House. The trio consists of Eric Butler on guitar/vocals; Austin Carango on drums; and Gabriel Paganin on bass. They are sometimes accompanied by their fourth unofficial member, Bart Starr, whom is also the sole mastermind behind the band Graduating Life. After releasing their first studio album, Best Buds (2016), in the summer of 2016, they quickly gained a massive following within the emo community. The band’s bandcamp page was shared amongst the community gaining the attention of many people across the country. One of them being a record label based out of Los Angeles named SideOneDummy Records. They signed the band on Oct. 4, 2017 – fifteen days before they would embark on their biggest U.S. tours yet.

The night was jam-packed with some of the hottest emo bands in the scene right now. Philadelphia bedroom pop artist, kississippi, started the night with a lovely set. She stood alone in front of a crowd of nearly 300 people and sang acoustic songs of hope, a nice start to the night. Graduating Life continued the night with another fun yet chill set where they played songs such as “Shred Cruz” and “Cold Raviolis”. Things then got kicked into fifth-gear once the next band, Prince Daddy & the Hyena took stage. They opened their set with the song “Clever Girl”, and all I remember is the crowd going into a full panic as the mosh pit began to open-up. It was during the song “I Thought You Didn’t Even Like Leaving”, when someone jumped on me whilst stagediving, breaking my glasses and leaving me blind for the rest of the night! It was one of the sickest pits I had ever been in and we still had two killer bands left!

Just Friends, an emo ska band from Dublin, California, went on next and, man-oh-man, they really blew me away. Lead singer and hype man, Sam Kless is one of the greatest live performers I have ever seen. The energy he and the other 7 people in his band had was purely insane live. At the end of the song “Welcome Mats”, the front of the pit, myself included, rushed the stage to sing the last verse alongside the band as we all wrapped our hands around one another – a moment I will remember for a very long time.

Finally, Mom Jeans. ended the night off by playing nearly every song in their discography. They opened with “Death Cup”, which had everyone in the crowd jumping and ready for the set of the night. At one point during the song “Edward 40hands,” I was pushed onto the stage and just stayed there for the remainder of the song singing alongside Bart, really milking the moment. They capped the night off with a song off their very first EP entitled “Birks In Stock”, a song that they announced on their Twitter that they would never play live. It was a nice gesture for the crowd, seeing that this was their first time ever playing in Washington. Overall, this was the best concert I have ever been to – a very memorable night.