Known for their quick wit indie-pop and youthful sound, Hippo Campus delivered a high energy and electric performance at the 9:30 Club.

Minnesota based indie-rock quartet, Hippo Campus, made their way through D.C. on Nov. 13 during their 2017 fall tour. Known for their quick wit indie-pop and youthful sound, Hippo Campus delivered a high energy and electric performance at the 9:30 Club.

The sonics were not far from the studio version and their on stage performance was fun and thrilling. The setlist was diverse, containing tracks from their latest full-length album Landmark (2017), along with highlights from their other EPs, especially their debut, Bashful Creatures (2015). From the opening song “Way It Goes” to their encore performance of 2015’s “Violet”, Hippo Campus had the club dancing, head-banging, and screaming their lyrics. Their boyish charm combined with their indie appeal and rockin’ energy to create a highly enjoyable experience. 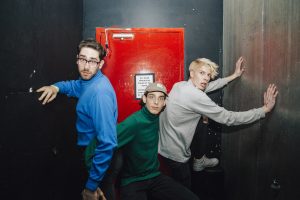 Prior to their set, another Minnesota based group, Remo Drive, took the stage. Fresh off of their debut release, Greatest Hits (2017), Remo Drive delivered some the best emo/punk-pop I’ve heard in a while. Combining elements of indie-rock with straightforward punk, this trio came through with a half an hour of solid tunes.

Although they probably won’t be back to D.C. until 2018, I would highly recommend checking out this group live if you get a chance. For now, you can enjoy Hippo Campus’ latest work, Landmark (2017), along with Remo Drive’s debut, Greatest Hits (2017), on all streaming platforms.