Earlier this week the political world lost United States Supreme Court Justice Antonin Scalia, who passed away at the age of 79 in Shafter, Texas. After the initial news broke, the media turned to a frenzy.

Some, however, got a little too caught up in the frenzy of quickly publishing stories or posting condolences via social media. Needing a photo for their story or dedication, they most likely typed “Scalia” in to an online images search and posted one without a second thought.

When searching “Scalia” on images, most of the photo results show a very stoic, serious SCOTUS judge, but there is one photo that appears to show a judge in a full, hearty laugh. Wanting a positive and uplifting post, some users and writers went with that photo. 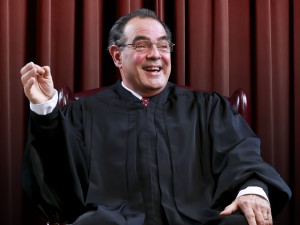 The Washington Times photo of Edward Gero as Justice Scalia in The Originalist at Arena Stage. Photo by Tony Powell.

There’s just one problem: that smiling man pictured in the similar judge robes is not Antonin Scalia. It is George Mason theater professor and renowned DC actor Edward “Ed” Gero, who teaches classes in Shakespeare, advanced acting and characterization on the GMU Fairfax campus.

Gero, who bares a very similar resemblance, portrayed Justice Scalia in Arena Stage’s production of “The Originalist” in 2015, and did so in terrific fashion, as the actor has received a Helen Hayes Award nomination for the performance.

One of the unfortunate media posters who chose this photo in a frenzy was a staffer for republican Senator Ron Johnson of Wisconsin. A condolence tweet was sent out from the Senator’s official Twitter account using the picture of Gero.

Gero, joking that some people must’ve thought he was the replacement to Scalia, mentioned that this time the issue was about the media: “They got to the AP Photo and forgot to check”, the actor said Monday evening about the photo miscues.

The photo tweet was later taken down, but another one surfaced as media outlets began to discuss Scalia’s replacement and the stalemate between President Barack Obama and the GOP on the matter. 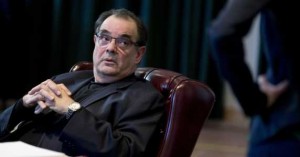 The photo shown left is another promotional photo of Gero in Arena Stage rehearsals for “The Originalist”, but it is the current link photo for The Huffington Post’s article: “Conservatives Quickly Refuse Obama Court Replacement After Scalia’s Death”, a piece that has nothing to do with Gero or the 2015 Arena Stage production. It just appears to be another example of mistakes caused by rush-posting when news breaks.

When he first heard the news of the Justice’s passing this weekend on the radio, Gero was immediately shocked.

“I mourn for the memories lost…having just made that friendship, I had just begun to know him”, Gero said over the phone this evening.

On a positive note, many current and former Mason students who know Gero are getting a kick out of seeing his face as the headlining image for several Scalia-related articles and social media posts. Given the recent events, as well as the great reception of the performance and presence of the DC-based actor, the question could be posed if we will ever see another revival of Gero’s Scalia interpretation. “The Originalist” was extended twice during its run at Arena Stage last year.

According to The Hill, Democratic presidential candidate Bernie Sanders referred to the recently deceased Justice Scalia as “Brilliant, Colorful and Outspoken”.

Even though publications such as Salon and Democratic Underground refer to him simply as an “impersonator” or “doppelgänger”, many DC locals would argue the same characteristics aforementioned by Sanders for Scalia are synonymous with the great teaching work and stage performances of Ed Gero.

In a final comment, Gero said heavily: “I know that Scalia is part of my legacy. I only hope now that I can be a part of his”.

Jesse Robinson is the General Manager of WGMU Radio and an occasional writer for the station’s website.