This week’s journal will examine the food and film experienced during my stay in Charlottesville, VA for the Virginia Film Festival.

Before we get started, here is the jam of the week: https://www.youtube.com/watch?v=YfEgHK94Bc0

Inspirational Video of the week: https://www.youtube.com/watch?v=HFIQIpC5_wY

Let’s start with the weekend’s food. All around, Charlottesville has a great food selection, as the town tends to avoid chain restaurants and sticks with what is local and tasty. Four male improvisers eating over the course of a weekend would be too much to spell out, so I have made an “All-Star Game” menu with the favorites from the weekend:

(Despite the expressions, they really did enjoy Blue Moon!)

2. Everything Bagel with Jalapeno-Lime Cream Cheese Spread from Bodo’s Bagels.

(This has always been a C-Ville favorite of mine! Do yourself a flavor and try it!)

LUNCH: 1. Take a stroll down the Old Town Charlottesville walking mall. Next to the Regal theater is a Taco shop. Pork Carnitas taco with the Salsa Verde to spice up your afternoon! You could also stop at one of the street vendors. One I know to be delicious is a BBQ street vendor that does a great layered mix (my family’s recipe is called a “Doc’s Mix”) of Carolina BBQ, Baked Beans, Sauce, and Cole Slaw. Mac and Cheese layer optional, but let’s be real, who wouldn’t take that option?!

2. Make lunch yourself with some delicious sauces and spices from The Spice Diva on Main Street. I found some delicious Creole and Chili seasonings, and even splurged and bought a bottle of Blueberry BBQ Finishing Sauce, Carolina Style. A gift for mom, the BBQ caterer!

DINNER: The 50-Wing Platter from Wild Wing Café near the train station. Our wing selection included a dry rub wing, a traditional hot buffalo wing, a lemon pepper sauce wing (group favorite) as well as a BBQ and chipotle based wing option. A great atmosphere to enjoy good grub and watch the UVA game (like we did, except the crowd died down when FSU started laying on the points).

DESSERT AND DRINKS: 1. A “Cheesecake Bite” prepared by Erik’s parents, our gracious hosts. It is what it sounds like, and it’s amazing.

2. A pot of “Golden Monkey” tea from the Tea Bizarre and Hookah Lounge on the walking mall. A nice way to warm up the night! 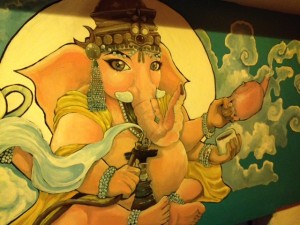 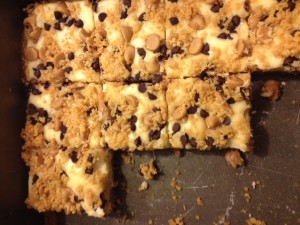 – The first film we saw at the festival was “The Humbling”, starring Al Pacino, directed by Barry Levinson (Good Morning Vietnam, Rain Man). The film follows the tribulations of struggling veteran actor Simon Axelrod. Pacino portrays a being who is fully immersed in the idea of “the character”, treating everyday situations and activities as staged scenes. These scenes play out in his head until he wakes up to reality, giving viewers a look within this struggling mind. His longing for the “escape” in to character is his eventual demise…or is it a blessing in disguise? The comedic moments at the beginning of the film bring levity and enjoyment to a debilitating character. However, as the film progresses we see the inner struggles of the mind and body that the inevitable factor of time control. 3.5 stars for film, 4 stars when combined with experience, as director Barry Levinson came out after the film to discuss the picture in further detail for the Charlottesville faithful.

– The other film I saw at the festival was “Foxcatcher”, starring Steve Carrell, Channing Tatum and Mark Ruffalo. In many ways this was the headlining film of the festival, and it was noticeable with the long, snaking line that ran down the vast majority of the old town walking mall. Steve Carrell re-defines himself as a multi-faceted comedic AND dramatic actor, filling a void in audience’s hearts after the tragic loss of Robin Williams, the seemingly insurmountable giant of the comedy-drama “happy medium”. Carrell plays paranoid billionaire John DuPont, who courts Olympic wrestling champion brothers Mark and Dave Schultz in to joining Foxcatcher Wrestling, a group which DuPont hopes will become the official training group for U.S. Wrestling. Tensions flare between DuPont and the Schultz brothers, as the drama sweeps the film in to a whole ‘nother level! Steve Carrell gives an Oscar-worthy performance in a dark, dramatic sports film. One of the must-watch films of the awards season! 4.5 stars

There you have it. Food, film, fun and friends. Charlottesville, VA: local eats…what a magical treat!

Stay tuned for the next Jesse’s Journal! Expect a holiday themed piece! For now, though: Gobble Gobble!

Tune in to hear Jesse Robinson every Tuesday night from 9-10 PM on WGMU Radio for “Improv for Mason” show.