Can Chip Kelly Flourish With the 49ers? 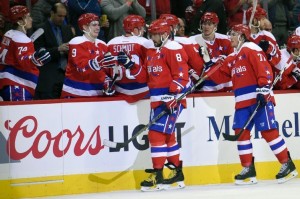 Because it’s been awhile since the latest installment of Caps Weekly, this issue will highlight where the Capitals are as a team and how they got there.

To say that the Washington Capitals have been dominant to this point is an understatement. They are rolling along at a record pace and show no signs of slowing down. Through 51 games, the Capitals hold a 38-9-4 record, good for 80 points. As of 7:00 eastern time on Monday, The Capitals have a seventeen point lead over the New York Rangers in the Metropolitan division with one game in hand.

At this point in the season, it seems as though the Capitals are well on their way to winning the President’s trophy for the first time since the 2009-10 season in which they scored 121 points. The Capitals have a slim four point lead over the defending Stanley Cup champion Chicago Blackhawks, however the Blackhawks have played five more games than the Caps. This Capitals team is on pace to score 128 points, the most of any team since the inception of the President’s trophy in 1986.

How They Got There
This team has had a lot of things come together well for them. This is has been a fantastic run for them so far due to many factors.

The Capitals have yet to lose two consecutive games in regulation this season. Ups and downs are a part of every team’s season, but even when the Capitals appear as though they are enduring a “down” they still find ways to win games. They have endured injuries on defense and among the bottom six forward lines and have been able to plug the holes without truly “missing” anyone. Any team that faces the Capitals can’t take a lead for granted. They don’t go away. The Capitals have erased leads of one, two and even three goals in games this season. They hope to keep this style of play going deep into the month of May and into June.

Team Captain and leading goal-scorer Alexander Ovechkin has said that he has been the Capitals’ MVP this season. To reward his efforts, he was selected to his first ever All-Star Game, and he has found himself in discussion to be a Hart Trophy finalist as the NHL MVP. Patrick Kane seems to have the upper hand for now, but if he goes cold, Holtby could be the second consecutive goalie to bring home the Hart Trophy. This is why: Holtby leads the NHL in wins by a goaltender and is on pace to shatter the record set by Martin Brodeur. Broduer posted 48 wins in 2006-07 and Holtby already has 33. Holtby also has saved 92.9% of shots he has faced and allows an average of 2.06 goals per game. He makes the tough saves look simple and always seems to make the biggest saves when the teams needs them the most. Enough cannot be said about what Braden Holtby has done for this Caps team this season.

The Emergence of Evgeny Kuznetsov

When Nicklas Backstrom had to miss regular season time due to offseason hip surgery, there was some fear that the Capitals would get off to a slow start having to fill that hole for the first part of the season. Evgeny Kuznetsov quickly silenced the questions with amazing puck skills, impossible passes and downright wizardry between Alexander Ovechkin and newly acquired winger T.J. Oshie. After Backstrom returned, he found himself back on the second line between Marcus Johansson and free agent signee Justin Williams. He has yet to cool off. Kuznetsov leads the Washington Capitals in points, assists and the entire NHL in +/-. After Johansson moved down to fill the third line center position, the struggling Andre Burakovsky moved into the second line left wing spot. Burakovsky has now scored five goals in his last seven games, recording a point in all of them. Those five goals are half of his season total of ten. Kuznetsov has 15 goals and 38 assists for 53 points. He is fifth in the NHL in points and third in assists. The Caps have finally found their second line center and they hope he can continue playing at this level for years to come.

One of the major differences between this year and last is the lack of line shuffling the Capitals have endured. Last season, seven different skaters filled the role of first line right wing next to Ovechkin and Nicklas Backstrom. This season, only one person has filled that role and it is TJ Oshie. Oshie was acquired from the St. Louis Blues for Troy Brouwer, AHL goalie Phoenix Copely and a third round draft pick. This is the first time the Caps have had a solid first line right wing since Alexander Semin left for Carolina in the summer of 2012. Fellow newcomer Justin Williams has provided the same spark to the second line. He and Oshie both play well on the power play and penalty kill, two areas in which the Capitals have found success. For years now, the Caps power play has been among the best in the NHL, but this season the penalty kill has also been one of the best in the league. The power play ranks first in the NHL in effectiveness and the penalty kill ranks fifth.

The Caps have thirty-one games remaining on their schedule, the most in the NHL. The Caps will be playing practically every other night for the balance of the season, a challenge the team welcomes. They look forward to getting into more of a routine over the next two months, and it will be interesting to see how well the Capitals maintain their pace over the last thirty-one games and into the playoffs. For the fans as well as the team, however, it’s cup or bust.

There are just under three weeks remaining until the NHL’s trade deadline and the Washington Capitals are not expected to be super active. Their activity completely depends on how healthy the team believes Brooks Orpik will be for the playoffs. If he is healthy, they may not make any moves at all. If his status is in question, the team could look to bolster the back end. It is also possible that they add a bottom six forward, but after signing Mike Richards, that does not seem to be a huge need. When it comes to their forwards, they are most likely taking the “if it ain’t broke don’t fix it” approach.

He leads the team and is second in the NHL in goals with 30. He has continues to play extremely well and he has hit a couple of huge milestones this season. He became the all-time leading Russian-born goal scorer and scored the 500th goal of his career this season. However, keep an eye on next season as he eyes his 1000th career point. He currently sits at 939 and would have to score two points per game to pass it this season, so it is safe to say that it won’t happen.

His emergence has been a big reason why the Capitals are where they are (see earlier paragraph).