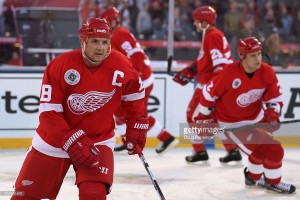 during the 2016 Coors Light Stadium Series Alumni Game at Coors Field on February 26, 2016 in Denver, Colorado. The Avalanche defeated the Red Wings 5-2.

Teams throughout the NHL are either buying or selling as the trade deadline looms over general manager’s heads during a pressure-packed part of the season. Teams such as the Capitals, Blackhawks, Stars and Kings are looking for an extra piece they can add to their team and are considered as buyers. Sellers such as the Habs are looking for a prospect or draft pick that can help shape a positive future for their club. The Devils are going to push all the buttons they can to clinch a playoff seed and have a good team that can go far into the spring.

With Detroit trying to keep their amazing 24-year playoff streak alive, don’t be surprised if the Wings’ try to break there current losing streak with a big splash of a trade. General manager Ken Holland will do anything he can to insure that octopi will be thrown on the ice this spring. This is Detroit’s last season in Joe Luis Arena and you know the Wings want to finish in style as they move out to their next barn.

The Capitals made one key move in an effort to add blue line depth. The Caps picked up Mike Weber, a Pittsburgh native, from the Buffalo Sabres for a third round pick in the 2017 NHL Draft. The Capitals, who have had an excellent season up to this point, are still looking for extra improvements to help their run in the upcoming Stanley Cup Playoffs. Don’t expect that Capitals’ general manager Brian MacLellan is done yet as rumors have persisted that he is interested in acquiring Andrew Ladd from the Winnipeg Jets. Ladd, the captain of the Jets, is a two-time Stanley Cup winner with the Hurricanes and the Blackhawks. MacLellan has shown over his tenure in Washington that he wants experience and leadership on his roster, something that was missing under his predecessor.

Most deals don’t get done until the very last day so there will be a lot for NHL fans to witness and ponder come February 29th. One of the most entertaining parts of the regular season, the trade deadline instills a lot of drama amongst the league and can either make or break teams at this crucial part of the season. Expect many moves to be made and many statements to be made by all teams in this terrific and competitive league that will do whatever it takes to drink beer from Lord Stanley.