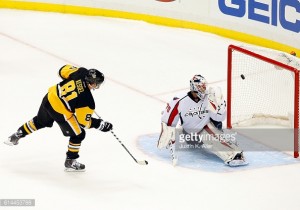 The Pittsburgh Penguins have officially began to defending their Stanley Cup championship after they raised there celebratory banner, basking in the glory they achieved rightfully last spring. But the visiting Capitals used this ceremony as proper motivation to not only steal two points from the Pens in PPG Paints Arena, but begin their quest to raise that coveted banner that has been elusive to the franchise since its inception.

The Capitals have done anything but forgotten their postseason heartbreak last year that ended a promising and hopeful campaign. Losing to the Penguins in 6 still painfully resonates with both the Capitals and their devout passionate fans and the enviable banner lift in Pittsburgh only functioned as motivations for the entire roster. The puck would drop and another classic Caps/Pens hockey game would commence.

Andre Burakovsky gave the Capitals the lead less than a minute in regulation and quieted the Pens’ faithful immediately. A five hole goal through Marc-Andre Fleury elated the Capitals bench and grasped that much needed momentum a road team strives to reach. Seven minutes later, Alex Ovechkin almost made it 2-0, but Fleury’s helmet would obstruct the shot and deflect the puck away from the net. The first period would end with the road team the only one to dent the twine.

In the second period, the speed and physicality from the first period carried on as both teams fought for every inch of ice and every inch of the puck. The Penguins offense was starting to gain energy and many opportunities were peppered at Braden Holtby. Holtby, last years Vezina winner, was sharp since the first shot and made difficult saves look frustratingly easy. Braden’s save against Tomas Sestito showed just how athletic and acrobatically talented he can be. His poise and focus makes it hard for any team to score and can frustrate opposing teams to no end. His shutout however would be diminished when Patric Hornqvist deflected the puck into the top shelf with no chance of Holtby making a stop. The Capitals claimed the puck was tapped in with a high stick but reviews would later illustrate that the stick was below the crossbar and the call on the ice would stand.  The arena was now alive and percolated the Penguins to keep playing their game.

Later in the second period, Evgeni Malkin found a gap in coverage and was found wide open in front of Braden Holtby. After some shake-and-bake Malkin slid the puck five-hole past Holtby lighting the red light and sending the Penguins barn into exuberation. The second period would end with the Penguins up 2-1 and a much needed intermission for the road squad took place, giving them to time to rest and recharge both physically and mentally.

Seven minutes into the third period Andre Burakovsky would notch his second goal of the evening and tie the game at 2. Marcus Johannson would almost follow suit after a breakaway that was barely saved by Marc-Andre Fleury kept the game tied. It would now take a 3-on-3 overtime scrimmage to determine the victor. Lars Eller almost capitalized off a beautiful pass from Alex Ovechkin that beat Fleury but hit the crossbar.

A shootout would be needed and after four rounds the Capitals would fall to their hated foes, but would at least leave Pittsburgh with a point. The Capitals looked sharp throughout the contest and hopefully that can be continued against the Islanders this Saturday in the District. One should feel optimistic about this Caps team and the way they played. Some even suggest that this may be a better built team than last years Presidents Trophy winners. Either way, 81 games remain and every point in this competitive league is precious if one wants to qualify for the Stanley Cup Playoffs and given a shot at hockey’s holy grail.