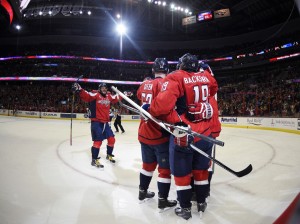 What a time to be a Caps fan! The Capitals are in the midst of a five game winning streak as they travel to Canada this weekend for match-ups against the Montreal Canadiens and Winnipeg Jets.

The Caps only played twice this past week after playing four times the previous week. They welcomed the Tampa Bay lightning on Friday and then traveled to Toronto to face the Maple Leafs on Saturday. Both matches ended in 4-2 victories for the Caps.

A large portion of the Caps recent success can be attributed to the outstanding play of their elite net minder Braden Holtby.  For his play, Holtby was named the NHL’s second star of the week as well as second star of the month of November. In November, Holtby posted a 9-2-0 record, 1.99 GAA, a .927 SV% and recorded one shutout against the Edmonton Oilers. As of the morning of December third, Holtby leads the NHL in wins with 15 and is second to one-time Capital Jaroslav Halak of the New York Islanders in goals against average with 1.95. Halak has allowed an average 1.93 goals per game to pace the league. Holtby is also tenth in save percentage with a solid mark of .926.

Besides Holtby, the hottest member of the Capitals might just be the ageless wonder Jason Chimera. The thirty-six year old left wing scored four points (2G, 2A) in two games this past week. Three of those points came on the power play after being placed on to the second line to create traffic in front of the net. This move has paid dividends for the Caps as we have seen their power play return to its status as one of the NHL’s most lethal after a stretch of mediocracy.

Last week’s game against the Tampa Bay lightning may have been one of the Capitals most dominant performances of the season. Tampa Bay played sluggishly for the first fifty minutes of the game. The Lightning surged, after the Caps had already scored four goals, with two goals in two minutes to make the game somewhat interesting. It appeared as though Braden Holtby would record another shutout, but Brian Boyle foiled it and Victor Hedman followed it up. The Caps scored three of their four goals on the power play. One each from Alex Ovechkin, Chimera and TJ Oshie. Marcus Johansson scored at even strength for the Caps third goal of the game, and that proved to be the game winner at 19:18 of the second period. Chimera, Evgeny Kuznetsov, and John Carlson all tallied two points in the contest.

The very next night, the Caps decided to test Braden Holtby with his first back to back starts of the season. The Caps made this move knowing that there were four days off between this game and the Caps next game in Montreal. This turned out to be a good decision as Holtby played strong. The power play again proved lethal, scoring twice in the third period. Johansson and Justin Williams were the respective scorers of these goals. For the second consecutive night, Holtby only allowed two goals, Chimera scored two points and Marcus Johansson scored the game winning goal. It’s also worth noting that Tom Wilson finally scored his first goal of the year on some great fore-checking and a spin-o-rama on front of Toronto goal tender Johnathan Bernier.