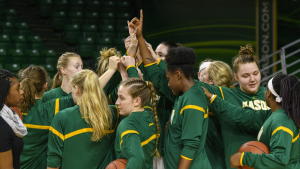 While most of us were on spring break, Monday night of this week, the Mason Women’s Basketball Team accepted a bid from the Women’s NIT tournament.

FAIRFAX, VA – While most of us were on spring break, Monday night of this week, the Mason Women’s Basketball Team accepted a bid from the Women’s NIT tournament. This marks the third time and in program history that we have qualified for the WNIT (2001, 2004, 2018). George Mason (23-9) will face Stephen F. Austin (25-6) out of the Southland Conference on Friday, March 16th at Eagle Bank Arena at 7pm. Let’s breakdown this match up and then talk about why this is monumental.

Now hold on one second, before you make any commentary on how they outscore us in multiple categories, let me say one thing. Based on what I can tell, the strength of the Southern conference is weak. There only seem to be 2 conference teams that were actually capable of beating SFA and this year in almost every game SFA won, they won by double digits, some by even margins of 70 points. One could say that Dayton only lost one game in conference play this year, and you do not see people calling the A10 a “weak” conference. However, Dayton is going to the NCAA tournament and SFA on the other hand…. was not even initially picked to be in the WNIT. It was not until Rutgers, who declined their bid, that SFA was invited to join the tournament field of the WNIT. That should tell how the WNIT’s committee looks at the strength of all the wins that SFA had in their conference.

Let me just make one thing clear, we should not be worried about this team, for a couple reasons. One, the majority of SFA’s points are made in the paint, and with a 6’5” Natalie Butler, a strong defensive Nicole Cardaño-Hillary, and a good man-to-man defensive strategy, we should be able to keep SFA out of the paint and force them to shoot the outside shots. Second, from what I have seen, in the majority of games that SFA has lost, they have also been out-rebounded. If GMU can grab rebounds and Butler is herself and grabs 20 or so rebounds of her own, I have no doubt that we can beat SFA. Thirdly, SFA is 9-4 in non-conference play, and 8-4 in away games. GMU on the other hand, is a perfect 10-0 in non-conference home games, this should definitely go in our favor as we have the home court-advantage, and the greatest pep band in the country, the GMU Green Machine.

Now let’s go win this game. Best of luck to you all. See you Friday.