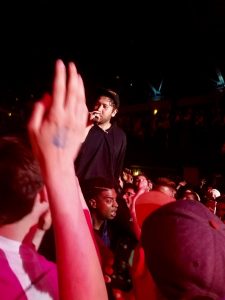 Right off the bat, I could sense that this wasn’t going to be just like any ordinary show.

Following the release of their fourth studio album, Sex & Food (2018), New Zealand-American psychedelic rock band, Unknown Mortal Orchestra (UMO for short), embarked on a full-length international tour with London-based, electro-dance artist, Makeness. On Friday, April 27th, the musicians stopped in the nation’s capital to play an electrifying show at the iconic 9:30 Club. Right off the bat, I could sense that this wasn’t going to be just like any ordinary show. My anticipation for their performance stemmed from my previous experience back in 2016 during their Multi-Love (2015) tour, and let me just tell you, these guys don’t fool around when it comes to stage presence. Every euphonic melody makes an impressive statement on its own, but along with the band’s magnetizing energy, Unknown Mortal Orchestra is indisputably remarkable.

A feature that’s worth noting about UMO’s takeover of the club Friday night was how they managed to visually encompass the whole aesthetic of their latest album. The venue’s stage was constructed to have a personality of its own, complete with white faux fur rugs, a mod plastic swivel chair for frontman Ruban Nielson, and a minimalistic, achromatic turntable sitting atop a sleek, coffee table. Beneath a couple of bookshelf speakers sat one of their long-play, instrumental SB-01/SB-02 vinyl records, ready for a spin on the groovy player. The stage itself embraced all the good things of my low-key fascination with modern/retro-inspired living space fusions, and my slightly pretentious dream of hanging in a contemporary abode listening to strictly analog recordings-

Good thing the song that started it all, “Ffunny Ffriends,” off their first and self-titled album, Unknown Mortal Orchestra (2011), snapped me right out of my grandiose daydreams and back into the nostalgia of UMO’s humbly memorable beginnings. The band continued with some fan favorites, featuring delicate tunes like “Swim and Sleep (Like a Shark),” from their second studio album, II (2013), and “Necessary Evil,” the eighth track from their critically acclaimed, third studio album, Multi-Love. I have to give credit to the amped crowd as well, for just flat out being incredible and going wild for Ruban when he produced shrilling riffs along the neck of his guitar. The electric lo-fi solos were notable in “From the Sun,” and “So Good at Being in Trouble,” both of which are featured in II (2013). From there on, the band continued with blasting energy, powering through “Nerve Damage!” off their self-titled album, and into a personal favorite of mine, “American Guilt,” the sixth track off Sex & Food (2018) that was released as a single prior to the official album release. The illumination on stage went from kaleidoscopic to fiery, misty reds, thematically appropriate for “American Guilt” and reminiscent of the cover art on the single itself.

I still cannot believe how engaging UMO was with the audience. Drummer Kody Nielson revved up the fans during their performance of “Not in Love We’re Just High,” the eleventh track from Sex & Food (2018), while frontman Ruban Nielson sang the song from within the crowd- all while perched on a fan’s shoulders! The sense of community and love in the crowd manifested itself even more so in tender tunes of the night such as, “Chronos Feasts on His Children,” and “If You’re Going to Break Yourself,” the final track from their latest album. The show could not have been complete without an opalescent version of “Can’t Keep Checking My Phone,” a hypnotically dance-inducing jam off Multi-Love (2015). I looked around hoping nobody was actually checking their phone because not only would that be painfully ironic, but Unknown Mortal Orchestra is the one band you wouldn’t want to miss a second of.