Tyler, The Creator at The Anthem 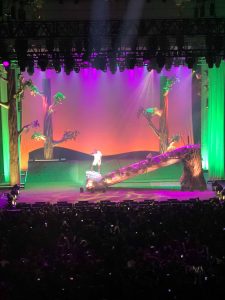 The Anthem hosted an epic, mind-numbing show with Taco (of Odd Future), Vince Staples, and Tyler, The Creator.

About 20 minutes after Taco’s set, a red microwave countdown pierced the stage. When the countdown reached the end, Vince Staples came through. The Compton rapper dropped tunes off his most recent album, Big Fish Theory (2017). In-between songs, news gathering footage mingled on the screen. Video static filled the auditorium inevitably, like white noise. Lyrics and chants from “745”, “Yeah Right” (feat. Flume, Kendrick Lamar, Kučka, and SOPHIE), and “BagBak” echoed in the crowd, along with older tracks like “Prima Donna” (feat. A$AP Rocky) and “Norf Norf”. To conclude, Staples’ live set was atypical, offbeat, and immeasurable in style.

By that time it was 9:30p.m. Upon Vince Staples’ opening, stage crew adjusted the set, prepping for Tyler. Though the stage was small, its colors and natural elements truly brought it to life, even from afar. Green turf wrapped along the floor and realistic trees were placed kindly at each direction.

At around 10:05p.m., all was dim. The cinematic interlude of “Where This Flower Blooms” (feat. Frank Ocean) started to loop. And then there he was. Tyler, The Creator. That is when all hell broke loose. Time gone stagnant. There was nothing but joy, but anxiety, but love for his appearance. Thousands of music lovers sang along in unison, to “Where This Flower Blooms” and to those following. Though he only dropped a couple verses from “Pothole” (feat. Jaden Smith) and “Boredom” (feat. Rex Orange County and Anna Of The North), the flow was still there. At points, he continued his rap flow without musical accompaniment – just the sound of thousands of voices following along. Along with his expected Flower Boy tunes, fans got a listening glimpse from the archives, with icons like “SMUCKERS” (feat. Lil Wayne and Kanye West), “Tamale”, and “IFHY” (feat. Pharrell Williams).

During breaks, he addressed his mood to the crowd – he was sick yet continued to thrive. Likewise, his character came through when acknowledging everyone in the crowd – those in the pit, in the stands, and in transit (those in attempt of meeting him by pushing through the already crammed space).

Without an encore, his send-off was “See You Again” (feat. Kali Uchis). A fitting departure.

Overall, Tyler, The Creator is an unconventional character that’s made a name for himself in the hip-hop industry over the years. He is best known for his connections to Odd Future (aka OFWGKTA), his GOLF fashion line, his silly YouTube videos, his artist collaborations, and recently, his Grammy-nominated rap album Flower Boy (2017). Last night at The Anthem was one for the books. It was a collection of everything that Tyler is made of, and so much more.