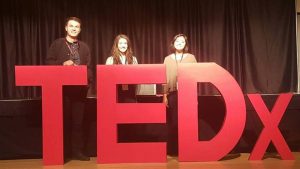 After months of planning and collaboration, the re-scheduled TEDxGeorgeMasonU spring conference was hosted in Dewberry Hall on September 10. With great patience and organization, the board of members crafted a remarkable conference that embodied the idea of “Revival”, referring to both the event and the conversations enveloped within the afternoon meeting. Several students and faculty gazed their attentions to intimate presentations set forth by prolific speakers across Mason’s many disciplines. The underlying questions arose: What is revival, and how can we cultivate change in a proactive way?

Concepts ranged from topics in politics, education, technology, culture, and beyond. The afternoon kicked off with an introduction from co-directors Rohma Hassan and Aisha Shafi. Though the conference was postponed, their hiatus helped the TEDxGeorgeMasonU board members fixate on the “Revival” theme. Hassan and Shafi were elated to share that after months of coordination, they are prepared to reinstate the conference’s return in following years.

Dr. Richard Rubenstein opened up the conversation with his presentation, working to resolve destructive conflicts. The university professor of Conflict Resolution and Public Affairs explained “partisan moralism”, an idea in which people of separate parties will invest in their own beliefs to make judgements about others. Rubenstein said that there is a natural tendency to “demonize” opponents, and because of this, coming to agreements typically will become violent. The professor believes that “non-violent radicalism” is the way to promote significant change in conflicts. Not just to represent a sense of diplomacy and resolution, but a sense of character, too.

Following the university professor was singer-songwriter Brian Bui, a member of GMU’s Music Production Club. His sensitive aura was complete with original songs like “Rollercoaster” and sing-a-long head-bobber “Wanna Get To Know You”. The soft guitar and honest lyricism are rooted in his experiences. His singles on relationships and self-love awakened listeners, leaving all inspired and gratified.

After a brief break, the discussion continued with Dr. Julie Owen, and her talk about how identities can shape leadership into efficacy. The associate professor of Leadership and Integrative Studies emphasized that leadership should be taught in the classrooms. “If we don’t teach leadership, what’s the alternative?” she asked rhetorically. But a part of teaching leadership is also teaching efficacy, which means building confidence and doing meaningful work. To reach satisfaction in work, it would require having a “vicarious experience” and identity awareness, exercising “active mastery” through case studies and community engagement, and understanding physiological states and the meaning of well-being.

Leadership can also be seen as continuing on despite limitations, whether physical, mental, etc. That is something that photojournalist Giles Duley elaborated on in his video presentation, “How a reporter becomes a story”, showed on a projector after Owen’s gripping conversation. Duley is a journalist who got tired of celebrity shoots and switched over to photographing in conflict zones, like Ukraine and Bangladesh. As a triple amputee, he expressed that “losing your limbs does not mean losing your life.”

Another break, but this time, with lunch. Sodexo provided attendees with a catered lunch, coffee, and Turkish treats, like baklava.

Then, Dr. Beth Cabrera took center stage. The author, scholar, and “First Lady” of George Mason shared her stories of mothering in Spain, alluding to her family and its impact on her well-being. 1 in 3 Americans are lonely, according to Cabrera’s research. A multitude of situations factor in, like digital dependency, societal pace, family dynamics, and more. To deviate from feeling lonely, Cabrera suggests that positive relationships will contribute to our well-being proactively. It is a “survival instinct” to look for conflict or negate something, but ultimately, “our well-being is up to us.”

Lyndsay Mikalauskas, another member of GMU’s Music Production Club, serenaded the audience after Cabrera’s invigorating speech. Her inner strength really showed through in originals like “Perpetual” and “60 Milligrams”. Her dreamy vocals and reverbed guitar riffs connected to her experiences with mental illness and sexuality, all of which captivated listeners.

The last live speaker was Dr. Feras Batarseh, a research assistant professor under the School of Geography and Geoinformation Science. With historical context, he described how artificial intelligence can be used to transform policy making. Because the government handles information through federal agencies and big businesses, given information has an unspoken bias and may not fully account for the opinion of the American people. With angst, he suggested that the federal government can govern the public transparently through data collection and analytics from open source domains.

The conference ended with a video of “The pursuit of ignorance”, led by neuroscientist Stuart Firestein. He used wittiness and unaltered comedy to explicate the importance of active curiosity. Drawing from his work as a professor, he learned that “we don’t talk about what we know, we talk about what we don’t know.” He compared concepts like the iceberg theory, the onion theory, the “magic well” theory, and even the “ripples on a pond” theory, to mark his own definition of knowledge. With more knowledge comes ignorance, and with ignorance comes more questions, leading to more discovery.

Across multiple disciplines, speakers and attendees drove conversations that encouraged critical thinking. There is no linear answer that defines “revival”, because it can be considered within separate contexts. The conference activated collaborative discussions which acted as catalysts for change among several social issues, ideologies, and concepts.