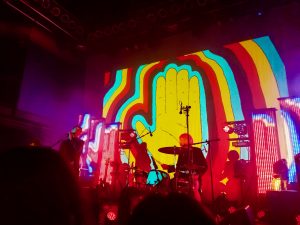 In a matter of minutes, however, the numbing dreamscape synths spliced into electrifying energy, along with beautifully synchronized patterns and projections blazing among the crowd.

Indie electro pop band, STRFKR, made waves through D.C. during their sold out show at the 9:30 Club on Saturday, February 17. They began their performance with “Hungry Ghost” off their third-studio album, Reptilians (2012). Commencing in utter darkness, with merely a captivating display of their iconic Jupiter (2009 & 2012) logo as a backdrop, it was evident that this show would eventually take a drastic angle. A fourth of the way through their set, the level of simplicity and sophistication was easily recognizable in “Rawnald Gregory Erickson the Second,” from their first and self-titled album, Starfucker (2008). In a matter of minutes, however, the numbing dreamscape synths spliced into electrifying energy, along with beautifully synchronized patterns and projections blazing among the crowd.

Accompanied by their touring band, the Reptaliens, the audience rejoiced to the bouncy beats of “Millions” while the Reptaliens froliced across the stage, dancing provocatively with one another, all while wearing eccentric astronaut suits. It was interestingly bizarre, but quite an indulging sight to witness, particularly when they blasted confetti onto the mass of concert-goers. The lively bunch went on to retrieve props, one of which happened to be an inflatable raft shaped like a swan. One by one, they crowd surfed through a pumped crowd while “Girls Just Want to Have Fun (2009)” reverberated off the walls of the venue.

STRFKR ended their set with the title track from their fifth studio album, Being No One, Going Nowhere (2016). Initially, a delicately nostalgic and melancholic tune such as this one seemed almost inappropriate to end the night with. But upon further reflection, they proved themselves to be truly unforgettable and it was undoubtedly a clever move from their part. This ignited the crowd to demand an encore, to satisfy their crave for one more galvanizing gimmick and fuel them with one last drop of exhilaration. And surely, it worked.