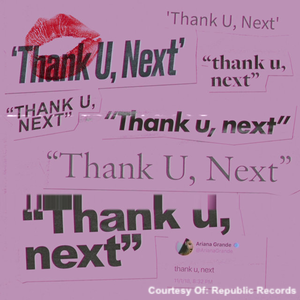 Earlier this year, Ariana Grande dropped her highly anticipated fifth album ‘Thank U, Next’ (2019). This album was created in the midst of the popstar’s highly publicized personal affairs.

For months, Grande was in the spotlight following the death of her ex-boyfriend Mac Miller and the split from her fiancé Pete Davidson. People could not wait to hear the outpour of her emotions on this album.

If you’re looking for a revolutionary kind of break up/self-love anthem, the album’s lead single and title track ‘Thank U, Next’ is the song for you and it proves to be the song for many as it was a massive hit. The single broke records and peaked at number one of the charts in numerous countries.

‘Thank U, Next’ was released shortly after Grande broke up with Pete Davidson and includes the lyrics, “-even almost got married, and for Pete I’m so thankful.” It also recognized a few of Grande’s exes whose names she included in the song; even her deceased ex-boyfriend Mac Miller with the lyrics, “-wish I could say thank you to Malcolm, cause he was an angel.”

The music video for this song was released shortly after the initial release of the track and referenced early 2000s rom-coms Mean Girls, Bring It On, 13 Going on 30 and Legally Blonde. This music video broke records on YouTube for being the most watched music video within 24 hours and the fastest video on Vevo to reach 100 million views.

Another smashing song on the album was Grande’s hit single ‘7 Rings’. This track peaked on the top of charts in 15 countries and broke the record on Spotify for being the most played song in 24 hours.

The third single released on the album was ‘Break Up with Your Girlfriend, I’m Bored’ and it debuted at the top of charts as well. This single made history for Grande as it made her the first female artist to replace herself at number one on the charts and also made her the first artist to dominate the top three spots on the chart since The Beatles in 1964.

The first song on the album, titled ‘Imagine’ was the promotional single for the album and many fans believe the track was inspired by Mac Miller who had an ‘Imagine’ tattoo and the lyrics seem to speak about Grande pretending past relationships didn’t end.

Another song on the album called ‘Ghostin’ was a reference to both Pete Davidson and Mac Miller, because Grande sings about what it was like dealing with the death of Miller while being with Pete. On the track ‘Fake Smile’, Grande sings about the dark side she faces being a superstar.

A huge part of the album ‘Thank U, Next’ is Ariana Grande pouring her heart out in song. This album was like a lyrical diary from her and it was beautifully done. From throwing shade at her exes to singing about being needy, Ariana gave fans everything with this album.

‘Thank U, Next’ has the perfect combination of songs to listen to when you’re feeling good or when you’re sulking in bed. This album is up and down, it’s real and refreshing… and it’s one that I highly recommend listening to!