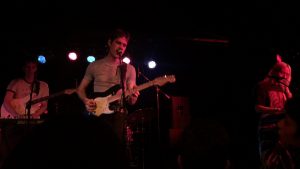 Porches hit the mark with their beautifully Tumblr-grunge aesthetic.

On March 22, Porches played at the Black Cat in DC, despite the rancid weather.

The first opener was New York-based band named Palberta. The all-girl rock group were super cute and dorky. It was a weirdly grunge rock style of music. After their performance, I expected another odd set with following acts.

The second opener was London-trio Girl Ray. The lead singer came out confident, with a guitar that taped to its strap. What a total switch compared to the primary opener. Instead of a rock approach, these girls mellowed out. They fused alternative with electronic. They got a stiff crowd to sway, which in ways came to a surprise. I could imagine their music be played at a chill house party. Her vocals beautified an already interesting showcase.

Porches came on last as the headliner. The performance that frontman Aaron Maine gave was euphoric. I had no idea of what to expect from him. Without any predispositions, I was truly stunned. The fan base was supportive. The crowd was interactive. Everyone was jamming to songs off of The House (2018) and dancing in unison. At points, Maine talked with the crowd – something I hadn’t seen in concerts prior.

That was something unique. Typically, I feel like artists are distant to their fans, but this being at an intimate venue, there was greater opportunity for this to happen.

Maine was very appreciate of the crowd he always gave his thanks after each song and repeatedly told the crowd how has was for them to be there. Though he had stage shyness and a quiet aura, the music still managed to shine through. And let’s not forget his signature butt shake.

At the beginning of each song, he’d give the crowd a little show, and everyone would go wild! His vibe was everyone else’s.

I didn’t even know Porches before the concert, but now knowing, I will definitely see him again in concert. It was just a beautiful and memorable night. The music was very chill vibes that got you to dance. Additionally, Maine’s stage dancing and crawling with him singing got me just to love the experience more.