Lit&Local with Death From Above 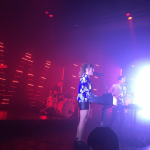 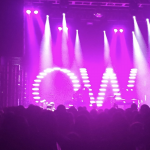 What a wonder – Oh Wonder was at the 9:30 Club in D.C. on Monday, Oct. 2. Who is Oh Wonder? The band originated in London, England, back in 2014 and consists of two band members – Josephin Vader Gucht and Anthony West. The band bases their genres around indie pop and electropop. They became internationally known through their DIY debut album and have been having several singles hitting top charts here in America and in a few other countries.

At the concert they had a fantastic set up going on – they had different color lights hitting/strobing the crowd to the different songs they played. They played a mixture of songs from their previous album and their new one. Two songs that stood in general that were very good was their singles “Drive” and “Lifetimes“. Watching the concert and being a fan of the band itself they rocked the house. The crowd was very pleased by their performance as was I and personally think they are better in concert than on Spotify or Apple Music. After reviewing the concert and their performance, I highly recommend going to see them the next time they come to a town near you. Their energy and excitement is thrilling, which truly shows their love for music and makes for a good time.

Solid 5, hands down. Will definitely be attending another one of their concerts.