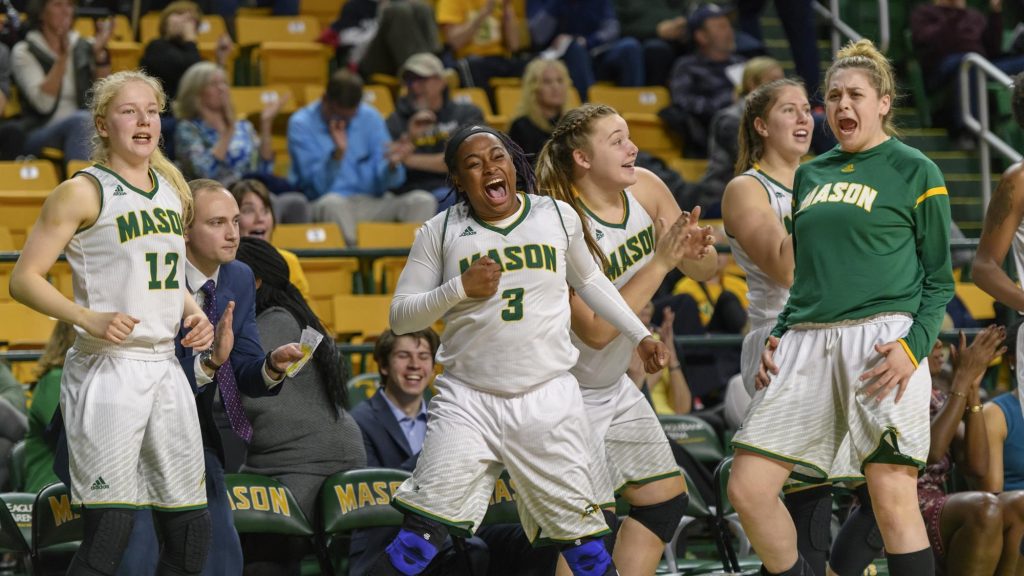 Nyla Milleson perfectly sums up this entire season – “Not sure I can be more proud of a basketball team.”

FAIRFAX, VA — The Mason WBB Basketball Season ended with their final loss in the Second Round of the WNIT against Virginia Tech back on March 18. However, do not let this loss define this entire season, as this team has accomplished so much, from individual accolades to program records; they worked extremely hard to arrive at where they are today.

Boom.  Let’s get it started.

11/22/17 – Patriots (5-1) win over Illinois St. (1-2) for their fifth straight victory of the season; this was Coach Milleson’s longest winning streak during her 5 years at Mason; this was the longest streak since the 2011-2012 season when Mason was still in the Colonial Athletic Conference.

11/24/17 – Mason (6-1) rally to win their sixth straight win against Drake in the Rocky Mountain Hoops Classic. This match the best start in six years for the program and they had won six straight games for just the second time in the last 24 years. The Patriots trailed by as much as 18 points in the first quarter before coming back and winning 87-75.

The Patriots finished with 7 wins in the month of November, which is the most in program history for the month.

12/11/17 – Patriots win over UMBC for their best start in 30 years by a score of 58-38. With this win, the Patriots moved to 8-0 at Eagle Bank Arena for their best home start in program history. Also, side note, I feel that because of what UMBC’s men’s team to UVA during this year’s NCAA tournament, it is an honor be mentioned in their presence. #UMustBeCinderella

The Patriots finished Non-conference play winning 11 games which was the most non-conference wins in 30 years since the season of 87-88.

12/31/17 – The Patriots rally and comeback from a 21-point deficit at the half to win against Davidson in the first A10 game of the season.  This was one of my favorite highlights of this season, as the Patriots were down by 21 after the first half and only allowed Davidson to score 16 points in the entire second half while scoring 47 to win in the end. With this win the Patriots moved to 10-0 at Eagle Bank Arena.

1/14/18 – Coach Milleson wins her 350th Career game as a collegiate head coach with the overwhelming win against University of Rhode Island by a season-high score of 92-53.

1/15/18 – Nicole Cardaño-Hillary is named the A10 Rookie of the week for the 4th time. She had double-digit scoring in every game of this season, was 2nd in scoring, and 1st in steals in the A10 conference. Additionally, she was 2nd in scoring and 2nd in steals among freshmen in the NCAA.

1/28/18 — Patriots lose to Fordham snapping their program-record home winning streak by a score of 67-62. At this time, the Patriots were 12-0 at Eagle Bank Arena before this matchup.

1/31/18 – The Patriots win over St. Bonaventure to clinch a winning season since 2003-2004; this being the Patriots’ 17th win of the season. Additionally, Mason matched their conference win total from the last two seasons with 6 conference wins. 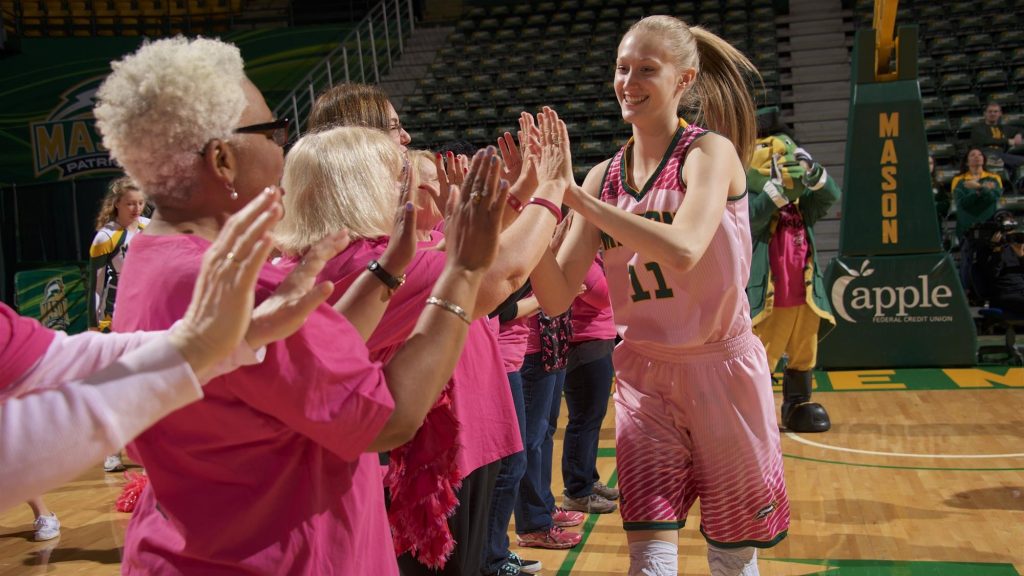 2/15/18 – Patriots were victorious over VCU to clinch their first 20-season in 17 years. This one was special.

2/18/18 – Mason ties the single-season school record for wins with victory over St. Bonaventure. This marked their 21st win, which was the fifth time the Patriots won 21 games in a season, the last time being 2000-2001. Furthermore, this was the breast cancer “pink” game, a game that was memorable to so many people.

2/24/18 – The Patriots defeat La Salle to set single-season school record with their 22nd win by a score of 65-55. With this win the Patriots finished in fourth place for their highest finish since joining the A10. Additionally, this tied the school record for the most conference wins in a season with 11.

#RandomStat (Courtesy of Bill Rohland): “Mason Set Program record for wins (22) its first time since joining D1 and the team did lose back to back games the entire season.”  This shows how tough the Patriots were as they did not let their losses distract them from winning the next game during the entirety of the season.

2/27/18 – Nicole Cardaño-Hillary hits her famous behind-the-back reverse layup as the play of the year in the first round of the A10 tournament win against St. Bonaventure.

3/2/18 – The Patriots were eliminated from the A10 Tournament with a Quarterfinal loss to the eventual champions, George Washington. Was this loss due to the fact that there was no Green Machine? No, probably not, the Patriots shot 41% and 29% from beyond the arch, while scoring ten points below our season average.

3/3/18 through 3/11/18 – This was the post-season waiting period, I tried to calculate the possibility of an at-large berth and the Patriots’ chances looked good, but it was not a guarantee that Mason would receive a bid. So many different scenarios had to happen for us to be a good contender.

3/12/18 – Mason receives an at-large bid to the WNIT for the first time since 2004 (Third time in program history). What a day this must have been for the team, I can imagine the excitement.

3/16/18 – The Patriots win their first postseason game in program history and Butler sets the D1 rebounding record. Cardaño-Hillary scores a career-high 28 points in this game.

3/18/18 Mason falls to Virginia Tech in Blacksburg ending their historic season by a score of 78-69.  Mason struggled in the first half, before mounting a comeback in the end and falling short.

Congrats on the great season, Mason WBB! Best of luck as you prepare for the next one!

Stay tuned for a Breakdown of Natalie Butler’s season on WGMU Sports.