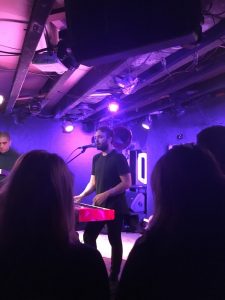 Ayer embodies an essence reflected in the album and live that makes you cherish how special love is from the simple and difficult moments in life.

You know Local Natives and now you get to know Kelcey Ayer. Kelcey Ayer has been a key member of Local Natives since their beginnings in California but now he takes his piano and vocals to step aside from the band to stand behind Jaws of Love.

Jaws of Love. visits our nation’s capital for his first solo tour on December 6th. DC9 was the percent venue for Kelcey Ayer. The venue matched the artist and his music perfectly, allowing the fans and the artist to connect on a more intimate level.

The show’s opener was COMBAT!, an experimental electronic solo artist, Mark Nieto, also doubled as the second half of Jaws of Love. Both from the LA area, the playful and intimate banter between Kelcey and Mark kept the atmosphere light and enjoyable throughout the show.

Ayer tours his debut album titled, Tasha Sits Close to the Piano (2017), named after his and his wife’s dog. The album possess heartfelt lyrics accompanied by his unique vocals and strong piano driven ballads. There are times I would get lost in the music and grow nostalgic of Local Natives’ Hummingbird (2013). Even though that feeling is present, Ayer proves that he can stand on his own two feet as Jaws of Love. The entire album is so pure offering a look inside Ayer’s heart in a way no other musician has done before.

I thoroughly enjoyed seeing Jaws of Love. live. Ayer embodies an essence reflected in the album and live that makes you cherish how special love is from the simple and difficult moments in life.