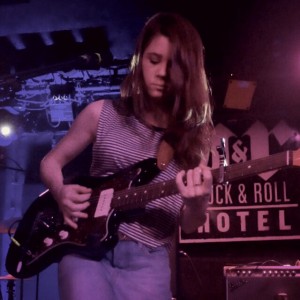 For Aly Spaltro, aka Lady Lamb (the Beekeeper), it all began with a dream and the basement of a local DVD store. As a teenager, Spaltro worked the closing shift at Bart & Greg’s DVD Explosion in her hometown of Maine, and spent many overnights practicing her guitar in the store’s basement. Around the same time, Spaltro began experimenting with lucid dreaming (when she did sleep, that is). She kept a dream journal by her bedside, in which she would write in half-conscious state and then later incorporate those thoughts and images into her music. Spaltro attributes many of the song lyrics on her first official release, Ripley Pine, and even her moniker to this experience.

The now Brooklyn based, indie-rock singer/songwriter is currently on tour promoting her newest release, After, under Mom + Pop Records. I had the opportunity to sit down with Spaltro before her show at the Rock and Roll Hotel in Washington, DC to discuss her unique story as well as the new album.