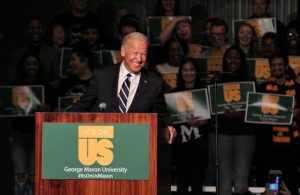 Joe Biden spoke at George Mason University on Wednesday about the “It’s On Us” campaign, an initiative to end sexual assault on college campuses. Photo By (Mimi Albano/Office of Student Media GMU).

FAIRFAX,VA – On Wednesday, April 26, Former Vice President of the United States Joe Biden stopped by George Mason University in a deliberate campaign to end sexual violence across all college campuses.

Rose Pascarell, Vice President of University Life, made the announcement on April 20 about Biden’s arrival and Mason’s mission to end sexual assault: “Mason has made eradicating sexual assault a top priority. It is the only university in Virginia to offer a 24-hour crisis hotline, which is managed by the Student Support and Advocacy Center. It also advances the critical notion that everyone at the university must play a part in ending sexual violence. That includes taking the Mason pledge to end sexual violence and understanding the importance of bystander intervention.”

The It’s On Us initiative was attended by faculty and students, members of GMU’s resources, and “13 Reasons Why” executive producer Joy Gorman and actress Alisha Boe, who plays Jessica Davis in the series.

Their mission is perpetrated on those surrounding the conversation: us. The It’s On Us campaign heavily focuses on the people involved (and not), and they admonish, “the solution begins with us.” Almost 40-minutes long, Biden’s speech enveloped into an open pledge to help survivors and improve college rhetoric circulating the topic. He encouraged students to enforce safety and intervene when situations leading up to sexual assault begin to unfold.

Biden confidently mentioned his longtime advocacy against sexual assault since 1994, when he issued the Violence Against Women Act. Since 2014, he has been a part of It’s On Us, the campaign initiated by then-President Barack Obama.

Biden presented his statements in such a way that was logical and clear to students. He ignited the crowd, leaving everyone in an uproar of compelling support and emotion. With his profound solutions, crowd-seekers were inspired to question the assumptions of scapegoating victims and survivors: “No young man or old man can justify his actions by saying, ‘It was my right. She asked for it’. That’s when we’ll have changed the culture.”

Anxious about the judgments of the future, he urged people to act out now. Be a part of the conversation and speak up, especially if victims are incapable. He connected his takeaways to treating others humanely: “Brutality is brutality. Human rights are basic. I don’t care what your religion. No religion, no culture, can be sustained or should be tolerated, that says it’s okay to abuse another human being. Period.” Readjusting common paradigms means changing the way in which college students casually communicate.

It’s On Us’ “Autocorrect” PSA, published March 28, shows viewers a familiar glimpse into a text message conversation, a possibly common way for younger generations to speak about the matter.

Biden, along with the other well established speakers, ended with positive and hopeful anecdotes. The group of speakers as a whole showcased their public and reveling support in the fight against sexual assault stigmas. Biden ended his speech eloquently, drawing back to the ultimate mission: “What you do has profound ripples. It’s about the urgency of now. Take the pledge. Follow through on it. Change the culture.”

*Contains explicit content that may not be suitable for everyone*

Check out It’s On Us’ Facebook page for more information.