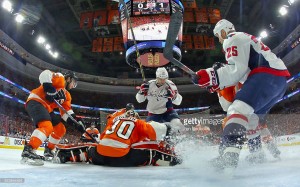 Michal Neuvirth of the Philadelphia Flyers of the Washington Capitals in Game Six of the Eastern Conference First Round during the 2016 NHL Stanley Cup Playoffs at the Wells Fargo Center on April 24, 2016 in Philadelphia, Pennsylvania.

The Philadelphia Flyers have forced a pivotal Game 6 back at Wells Fargo Center, where fans of the orange and black are sure to be loud cheering for their hometown team. With a shutout win in D.C, the Flyers have gained momentum in the series and look to force a nerve-wracking Game 7 for Caps fans. The Capitals, who took a 3-0 lead in the series, look to end the Flyers’ season tomorrow and put this series to rest.

Game 5 was perhaps the greatest performance by a team that got shutout in the history of the Stanley Cup Playoffs. The Capitals played an excellent game, with 44 shots compared to the Flyers’ 11, but could not find a way to beat former Cap goaltender Michal Neurvirth. The Flyers goal was scored by Ryan White off a deflection from Taylor Chorney’s skate in the slot. The puck would beat Holtby and graze into the net, adding plenty of nervousness into the crowd. All D.C hopeful however thought eventually with the Capitals masterful offensive punch that has been prevalent all season, that the boys in red will score and tie the game up. It never happened.

Michal Neurvirth stood on his head all game long and was peppered with shots from all angles. In the third period, the Flyers showed no interest in offense and decided to just clamp down in front of their goaltender and play a shutdown defensive game, blocking shots and putting their sticks on the ice to clog up passing lanes. It worked, and with Chris VandeVelde’s empty net goal the Flyers forced a Game 6 in front of their passionate and rabid fans.

The Capitals have had immense pressure all season long to succeed in the Stanley Cup Playoffs and have a heavy task tomorrow at noon to start a handshake line after three periods. The Flyers will come out on fire and the Capitals must survive the first ten minutes in order to play their game on the road exceptionally. Penalties that plagued the Capitals in Game 5 must not be repeated in Game 6 and discipline after the whistle is a must. The Capitals must dig deep through this adversity and if they want to play those birds in the next round, but the other Pennsylvania team must be sent packing first.