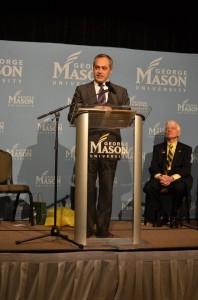 At a special Board of Visitors meeting this morning at the Mason Inn Conference Center and Hotel, Dr. Àngel Cabrera was unanimously voted to succeed President Merten as the 6th President of George Mason University.

In an exclusive roundtable interview with The Office of Student Media, when asked by WGMU General Manager Alex Romano about the possibility of starting a D-1 football program at Mason Dr. Cabrera said “Athletics are a key part of a rich learning experience but they have to serve the academic mission of an institution; and unfortunately at some institutions a sports team becomes more important than the university itself; obviously not at Mason, but I think it’s wrong for that to occur… the sports program ought to enrich the academic experience, not overshadow it, and that’s my philosophy.”

When asked by WGMU Operations Manager Storm Paglia to describe his experience since Sunday when he was informed of the BOV’s decision to select him as Merten’s successor, Dr. Cabrera had this to say “It’s been nuts… its been very emotional for me; I love Thunderbird and its been 8 wonderful years for me there, I’m going to have to say good bye to a place I love, but it’s definitely been the most intense few days of my professional career, and things have happened very quickly, but I’m ready.”

When Reuben Jones, Senior Administration Reporter for Connect2Mason asked what Dr. Cabrera sees as the role of the University President he responded with “a big part of the President’s role is to represent the university on the outside and to try to get more support and funds for the university, but no president can do that if they’re not fully embedded in the real life of the university; you can not be an ambassador for the university if you don’t spend time with the students, spend time with the faculty and I need to figure out the best way to do that; I don’t know if I will be able to teach my own class, and I would love to do that but I fully intend to be in very close contact with the students.”

Alex and Storm also had the chance to interview President Merten and Student Body President Ally Bowers, who was the only student to be on the Presidential Search Committee. When asked what she was looking for in the new President, she had this to say, “It wasn’t what I was looking for, it was what the students I represent were looking for. They all shared the same visions as me; someone who was passionate about Mason, or their current institution that they could bring here, someone that was really vested in furthering this institution and for student’s sake, strengthening our degrees further from what they already are. I’m thrilled about how the process turned out and I couldn’t be happier with the end result.”

President Merten was asked how he feels about the selection of Dr. Cabrera as the next President of George Mason and he responded with “I’m very excited about the progress we’ve made over the last 16 years, frankly, over the last forty years… what impresses me about Dr. Cabrera is that he will be able to follow in that mode. There may be a little cloning here, he has a background that is somewhat similar to mine, and obviously I’m encouraged by that. He understands where we are and where we need to be and the challenge will be to lay out his plan for the next 5 or 10 years and I feel he will be able to do that.”

Storm Paglia is the General Manager of George Mason University's WGMU Radio, a division of the Office of Student Media.