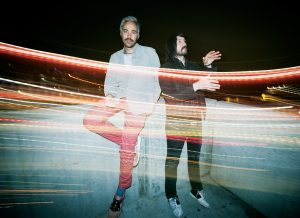 The band has perfected their craft after years of touring, and they gave one of the most exciting and energetic shows that I’ve ever experienced.

On Oct. 28, The Filmore Silver Spring welcomed the eclectic rock-duo Death From Above! The Canadian group consists of only a drummer/vocalist and a bassists/keyboardist, but the band delivers so much energy and power through their music, that it feels like nothing is missing. The group is on tour supporting their most recent album, Outrage! Is Now (2017), and as such opened with the first track on the album “Nomad” – a hard-hitting track perfectly queued to start the excitement.

Next up, they followed with some tracks from their older albums, like The Physical World (2014). They continued bouncing about through their discography, leaving very little out and hitting every song I was dying to hear. The wild intense energy they started with kept growing as the set went on, and the crowd’s energy grew right along with it.

Death From Above clearly had a no-frills approach to the set, with only simple but effective lighting to go along with the music. There were no crazy effects, extras, or distractions. And while at first this may seem boring, my excitement never dipped; it allowed you to give your focus purely on the music and truly appreciate the talent and showmanship these guys both have.

When the set came to it’s apparent end, the crowd stuck around and chanted for an encore. Like the rest of the show, the band delivered. They came back out for two more songs, one called “Right On, Frankenstein!”, for Halloween. The other was “Blood On Our Hands”, my favorite track from them. This single was dipped out of the live setlist for years, but they brought it back once for this show.

Looking back at old videos of the band live, you can’t help but see amazing improvement over the years. The band has perfected their craft after years of touring, and they gave one of the most exciting and energetic shows that I’ve ever experienced. Next time they are around, I will definitely be seeing them again.