The Jungle Giants at The Black Cat

The venue itself is small, certainly compared to other well known D.C. venues like The Anthem. The stage is low to the ground, enough to sit on, and the room extends back to accommodate for sold out shows, with additional seating by the bar on the left and in a sectioned off area on the right for those who’d rather not stand.

The energy is always hard to gauge, as different artists have different fans with varying levels of obsession and the desire to wait outside for hours or pack themselves near the stage, but this show was different. Not many people were waiting outside, or waiting for long, and they trickled in slowly throughout the time before and during Tim Atlas’s set. The crowd was laid back, scattered around, drinks in hand, chatting excitedly while waiting for the show to start. There was no mad dash to the stage, as being too close at The Black Cat also means having to crane your neck upwards to see artists who loom directly above you (which is where I was and what I was doing, but it’s worth it for the view).

Doors opened at 7:30, Tim Atlas came on at 8:15, and The Jungle Giants at 9:15. Tim Atlas had two friends with him as his band, and started his tracks on his computer before playing his groovy tunes that had everyone bobbing along. He got the crowd involved, and had us snap and sing as he directed us. After the show he was in the back, selling his merch and talking to people. We had a short conversation and he gladly signed me and my sister’s postcards and CDs, and recorded a video saying the WGMU slogan, “Your voice amplified,” before thanking us for coming and wishing us a good night. Though it didn’t seem like too many people were there to see him, he had an upbeat and positive stage presence and definitely made dozens of new fans.

At a little past 9:15, after the crew came onstage to test each instrument before the main act, The Jungle Giants stepped under the lights to thunderous applause and screams of encouragement. They gleefully introduced themselves and talked to the crowd about what they’d done in D.C. so far, before going into “On Your Way Down” from their 2017 album Quiet Ferocity, after which they played fan favorite and classic “She’s a Riot” from 2013’s Learn to Exist. To this they said they’d found a renewed love for the 10 year old song after playing it every night of this year’s tour.

They ran through their setlist fairly quickly, as they only played 13 songs, but it never felt like they were playing just to get through the night. They interacted with the crowd more than anyone I’ve seen live (other than maybe Easy Life) and it truly looked like they were having fun doing it too. The frontman, Sam Hales, gave me the mic, let people play his guitar, took people’s BeReals, jumped into the crowd, shook my/people’s hands (they called it “Shaking Hands With America”), and took a picture of the crowd with my little digital camera when I asked. They played mostly songs from their newest album Love Signs, the brainchild and passion project of Hales, and songs from their 2017 album, Quiet Ferocity. Instead of doing an encore, they declared they wanted us to put all our energy into the last song they played, “Heavy Hearted”, and the ground shook with everyone jumping and screaming their heavy hearts out once last time.

They’ve been in the industry a long time (their first EP came out in 2011 while they were in high school) and their passion for what they do showed in every minute of their set. They treated their songs and crowd with so much love that even someone who doesn’t know anything about them or any of their songs going in (basically my sister) would leave their show giddy and flushed. The Jungle Giants used the intimacy of The Black Cat to their advantage to perform a show the audience won’t soon forget. 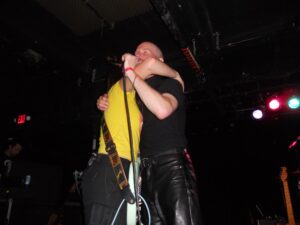 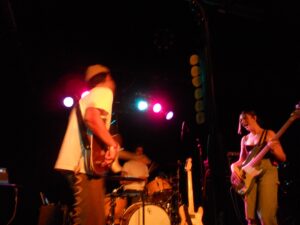