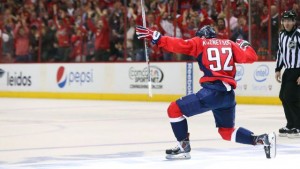 This past week saw Alex Ovechkin break finally score goal number 484, Braden Holtby record his first shutout of the season, and Evgeny Kuznetsov continue to make amazing things happen. The Capitals played four games this past week winning three of them. This stretch of four games in seven days is a part of a stretch where they play the league-maximum seven games in eleven days.

Last Thursday in a losing effort to the Dallas Stars, Alexander finally scored a goal that wasn’t disallowed. Ovechkin scored after an instinctive no-look pass from Nicklas Backstrom set him up right on the door step of Kari Lehtonen. With that goal, Ovechkin bypassed Detroit Red Wings legend Sergei Federov as the all-time leader among Russian-born players in goal scoring. Here’s to 484 more Ovi!

Nate Schmidt continues to play really well on the top-pairing with fellow defenseman John Carlson. Schmidt, who normally plays on the third pair with Dimitry Orlov, has stepped up in the absence of Brooks Orpik. Orpik has been absent from the lineup for the past seven games and will miss his eighth straight Friday night against the Tampa Bay Lightning. Schmidt has shown off his impressive skating ability and contagious smile along with a goal and an assist during those eight games. Normally, Orpik is one of two Alternate captains along with Nicklas Backstrom. In Orpik’s absence, John Carlson has sported the capital “A” on his sweater.

Last Thursday, the Dallas stars came to town in a game that showcased two of the top teams in the NHL this season. Dallas came away with this one in a 3-2 victory and even Coach Trotz was pleased with the way his Caps played. The highlight of the Caps performance was that Alex Ovechkin did finally break the Russian goal-scoring record. Both teams scored in the first period but after that it was a goalie battle between Kari Lehtonen and Philip Grubauer. Grubauer got the nod after Holtby played the previous night. The record breaking goal from Ovechkin tied the game at two in the third period after former-Cap Cody Eakin scored. Unfortunately, Jason Spezza broke the tie and won the game for the stars just past the eleven minute mark of the third.

Two days later, the Caps handled their business against the visiting Avalanche. They put on a scoring clinic against goalies Reto Berra and Calvin Pickard. Evgeny Kuznetsov and Jason Chimera each came away with three points. Berra started the night for Colorado but after allowing four goals in the first period, Colorado coach and Hall of Fame goaltender Patrick Roy made the switch to Pickard. Oddly enough, four of the Caps seven goals came from their defensemen. John Carlson, Nate Schmidt, Dmitry Orlov, and Karl Alzner all scored. It was the first of the season for Schmidt and Orlov. The Capitals dominated the game and won 7-3.

Continuing the trend of every-other-day games, the Capitals welcomed the Edmonton Oilers to Verizon Center on Monday. The Oilers were without rookie center Connor MacDavid. This game was almost the exact opposite from their game against the Avalanche on Saturday. This game was a total goalie battle between Braden Holtby and Anders Nillson. The only thing that did not make this exact opposites was the the Capitals still came out victorious. There wasn’t a single goal scored until over thirteen minutes into the third period when Dmitry Orlov scored in his second consecutive game. Orlov scored the lone goal that gave the Capitals the 1-0 win over Edmonton. Braden Holtby scored his first shutout of the season.

The Capitals continued their win streak on Wednesday against the Winnipeg Jets. Dmitry Orlov scored the game winning goal to extend his goal-scoring streak to three consecutive games. This was also his fourth consecutive game with a point scored. The Caps won 5-3 and center Evgeny Kuznetsov added three more points to his season total. He leads the Capitals in points and he is scoring points in bunches.

Evgeny Kuznetsov has continued to impress the hockey world and as of 11:00 pm Friday 11/27, He is fourth in the NHL in points, sixth in assists, and tied for the NHL league in +/- with Jeff Carter. This is Kuzy’s second full season in the NHL and he is the leading scorer on a team that includes Alex Ovechkin and Nick Backstrom. Dmitry Orlov had himself a great week. He scored three goals and added two assists in four games. His goal against Colorado was dubbed a Houdini goal because nobody knew where the puck went. He has played well on the third pair with Taylor Chorney and Nate Schmidt this season. Braden Holtby has also rocketed up the statistics ladder. He now leads the NHL in both wins and Goals-Against-Average. He also sports a top-ten save percentage. Holtby is a rock in between the pipes and has gotten better as the season has worn on.

I apologize for the Saturday publication. I took Thursday and Friday to spend time with my family and friends. I also was in attendance for the Caps wins over Edmonton and Winnipeg. If you have not gone to a Caps game, I assure you it is well worth the price of admission. I wish everybody a happy Thanksgiving and I also hope everyone was able to retain their limbs over the black Friday shopping frenzy. Happy Holidays everyone and GO CAPS!