Ten-time Grammy award winner Bob Dylan has announced his 2021-2024 ‘Rough and Rowdy Ways’ tour in support of his new album of the same name after his longest touring hiatus since 1984. His most famous songs include “Knocking On Heaven’s Door,” and “Blowin’ In The Wind,” but his newest album, which released in June of 2020, received overwhelmingly positive reviews from critics and fans alike.

The eighty-year old will be kicking off his US tour on November 2nd in Milwaukee, and concluding it exactly one month later on December 2nd here at The Anthem in Washington, D.C. The Nobel Prize winner and his band have played an average of one-hundred shows per year since commencing the ‘Never Ending’ tour in 1988, adding up to over a whopping three-thousand shows, an impressive feat for any artist.

So, don’t think twice and come out to The Anthem on December 2nd to see one of the greatest songwriters take the District by storm. Doors open at 6:30, and the show starts at 8:00. Tickets can be purchased here: https://bit.ly/3oSynMj 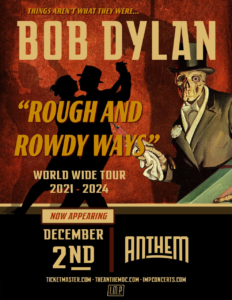